P0494 (S1616). - A Nonspecific Gastrointestinal Symptom Leads to a Rare Colonic Metastasis in a Patient With Remote History of Breast Cancer 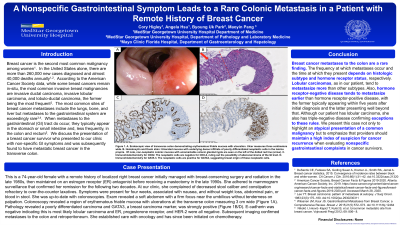 Breast cancer is the second most common malignancy in women and can metastasize to the lungs, bone, and liver; colonic metastases are exceedingly rare. We discuss a breast cancer survivor who presented with non-specific GI symptoms and was found to have metastatic breast cancer in the colon.

Methods: This is a 74-year-old female with a remote history of localized right breast cancer initially managed with breast-conserving surgery and radiation in the late 1980s, then maintained on an estrogen receptor (ER) antagonist before receiving a mastectomy in the late 1990s. She adhered to mammogram surveillance that confirmed her remission for the following two decades. At our clinic, she complained of decreased stool caliber and constipation refractory to over-the-counter laxatives. Symptoms were present for four weeks, associated with nausea, and without weight loss, abdominal pain, or blood in stool. She was up-to-date with colonoscopies. Exam revealed a soft abdomen with a firm focus near the umbilicus without tenderness on palpation. Colonoscopy revealed a region of erythematous friable mucosa with ulcerations at the transverse colon measuring 3 cm wide (Figure 1A). Pathology revealed a poorly differentiated carcinoma and GATA3, a breast carcinoma marker, was strongly positive (Figure 1B/D). E-cadherin was negative indicating this is most likely lobular carcinoma and ER, progesterone receptor, and HER-2 were all negative. Subsequent imaging confirmed metastases to the colon and retroperitoneum. She established care with oncology and has since been initiated on chemotherapy.

Discussion: Breast cancer metastases to the colon are a rare finding. The frequency at which metastases occur and the time at which they present depends on histologic subtype and hormone receptor status, respectively. Lobular carcinomas, as in our patient, tend to metastasize more than other subtypes. Also, hormone receptor-negative disease tends to metastasize earlier than hormone receptor-positive disease, with the former typically appearing within five years after initial diagnosis and the latter presenting well beyond that. Although our patient has lobular carcinoma, she also has triple-negative disease confirming exceptions to these rules. We present this case not only to highlight an atypical presentation of a common malignancy but to emphasize that providers should maintain a high index of suspicion for cancer recurrence when evaluating nonspecific gastrointestinal complaints in cancer survivors. 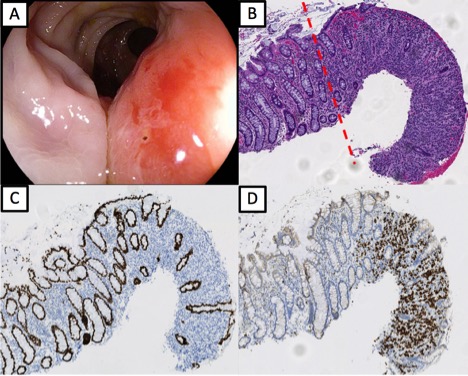