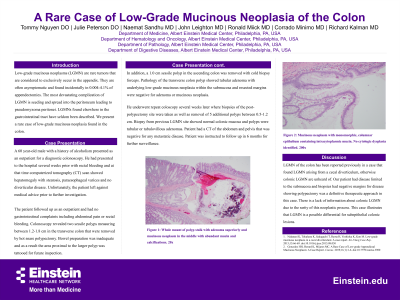 Introduction: Low-grade mucinous neoplasms (LGMN) are rare tumors that are considered to exclusively occur in the appendix. They are often asymptomatic and found incidentally in 0.004-4.1% of appendectomies. The most devastating complication of LGMN is seeding and spread into the peritoneum leading to pseudomyxoma peritonei. LGMNs found elsewhere in the gastrointestinal tract have seldom been described. We present a rare case of low-grade mucinous neoplasia found in the colon.

Methods: A 60 year-old male with a history of alcoholism presented as an outpatient for a diagnostic colonoscopy. He had presented to the hospital several weeks prior with rectal bleeding and at that time computerized tomography (CT) scan showed hepatomegaly with steatosis, paraesophageal varices and no diverticular disease. Unfortunately, the patient left against medical advice prior to further investigation.

The patient followed up as an outpatient and had no gastrointestinal complaints including abdominal pain or rectal bleeding. Colonoscopy revealed two sessile polyps measuring between 1.2-1.8 cm in the transverse colon that were removed by hot snare polypectomy. Bowel preparation was inadequate and as a result the area proximal to the larger polyp was tattooed for future inspection. In addition, a 1.0 cm sessile polyp in the ascending colon was removed with cold biopsy forceps. Pathology of the transverse colon polyp showed tubular adenoma with underlying low-grade mucinous neoplasia within the submucosa and resected margins were negative for adenoma or mucinous neoplasia.

He underwent repeat coloscopy several weeks later where biopsies of the post-polypectomy site were taken as well as removal of 5 additional polyps between 0.5-1.2 cm. Biopsy from previous LGMN site showed normal colonic mucosa and polyps were tubular or tubulovillous adenomas. Patient had a CT of the abdomen and pelvis that was negative for any metastatic disease. Patient was instructed to follow up in 6 months for further surveillance.

Discussion: LGMN of the colon has been reported previously in a case that found LGMN arising from a cecal diverticulum, otherwise colonic LGMN are unheard of. Our patient had disease limited to the submucosa and biopsies had negative margins for disease showing polypectomy was a definitive therapeutic approach in this case. There is a lack of information about colonic LGMN due to the rarity of this neoplastic process. This case illustrates that LGMN is a possible differential for subepithelial colonic lesions. 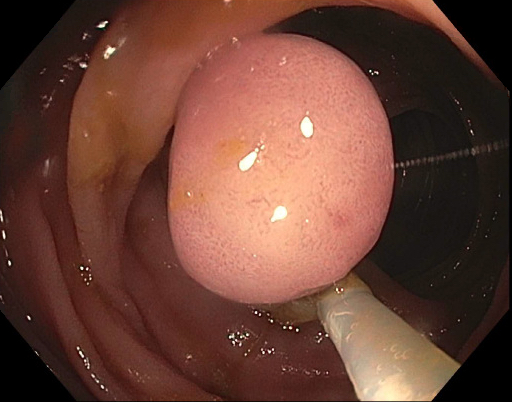