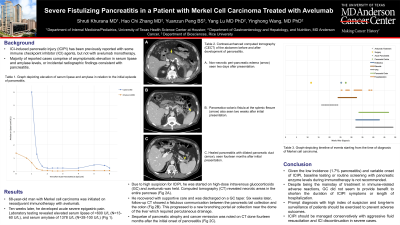 Introduction: ICI-induced pancreatic injury (ICIPI) has been previously reported with some immune checkpoint inhibitor (ICI) agents, but not with avelumab monotherapy. The majority of reported cases comprise of asymptomatic elevation in serum lipase and amylase levels, or incidental radiographic findings consistent with pancreatitis.

Methods: A 68-year-old man with Merkel cell carcinoma was initiated on neoadjuvant immunotherapy with avelumab. Ten weeks later, he developed acute severe epigastric pain. Laboratory testing revealed elevated serum lipase of >600 U/L (N=13-60 U/L), and serum amylase of 1378 U/L (N=28-100 U/L) (Fig 1). Due to high suspicion for ICIPI, he was started on high-dose intravenous glucocorticoids (GC) and avelumab was held. Computed tomography (CT) revealed necrotic areas in the entire pancreas (Fig 2A). He recovered with supportive care and was discharged on a GC taper. Six weeks later, follow-up CT showed a fistulous communication between the pancreatic tail collection and the colon (Fig 2B). This progressed to a new branching portal air collection near the dome of the liver which required percutaneous drainage. Sequelae of pancreatic atrophy and cancer remission was noted on CT done fourteen months after the initial onset of pancreatitis (Fig 2C).

Discussion: The reported incidence of ≥ grade 3 elevation in amylase and lipase is about 8.4% and 26.9% respectively in patients treated with dual ICI therapy. Interestingly, only one-fifth of these patients (1.7% overall) developed symptomatic pancreatitis Given the low incidence and variable onset of ICIPI, baseline testing or routine screening with pancreatic enzyme levels during immunotherapy is not recommended. Our patient developed pancreatic atrophy despite permanent discontinuation of avelumab but still demonstrated excellent cancer response even with termination of ICI. Despite being the mainstay of treatment in immune-related adverse reactions, GC did not seem to provide benefit to shorten the duration of ICIPI symptoms or length of hospitalization. We postulate that GC may have led to subsequent development of infected pancreatic abscesses by causing immunosuppression and delayed healing. Prompt diagnosis with high index of suspicion and long-term surveillance of patients should be exercised to prevent adverse outcomes. ICIPI should be managed conservatively with aggressive fluid resuscitation and ICI discontinuation in severe cases. 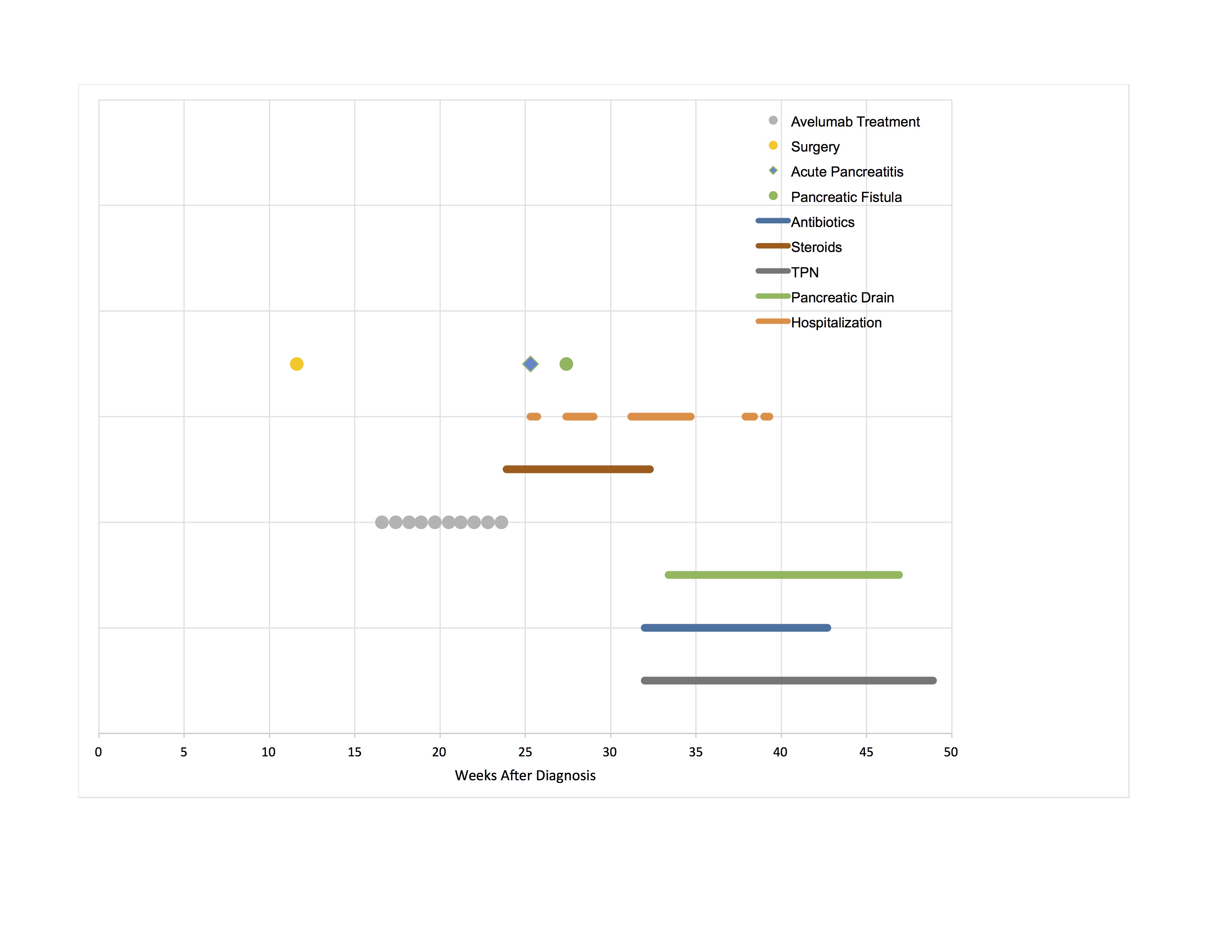 Graph-depicting timeline of events starting from the time of diagnosis of Merkel cell carcinoma.