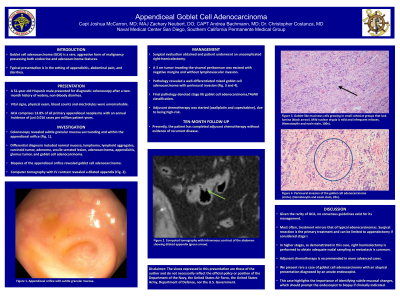 Introduction: Goblet cell adenocarcinoma (GCA) is a rare, aggressive form of malignancy possessing features of both a neuroendocrine tumor and adenocarcinoma. Typical presentation is in the setting of appendicitis, abdominal pain, and diarrhea. We present a 51-year-old patient diagnosed after diagnostic colonoscopy for two-month history of diarrhea.

Discussion: GCA is a rare malignancy combining the characteristics of neuroendocrine tumors and adenocarcinoma, comprising 13.8% of all primary appendiceal neoplasms with an annual incidence of just 0.017 cases per million patient years. Most patients present with symptoms suggestive of acute appendicitis (acute right lower quadrant abdominal pain, nausea, vomiting, diarrhea, and a palpable abdominal mass) as the appendix is the most common organ afflicted. Given the rarity of this condition, no consensus guidelines exist for its management. Most often, treatment mirrors that of typical adenocarcinomas. Surgical resection is the primary treatment and can be limited to appendectomy if considered stage I. In higher stages, as demonstrated in this case, right hemicolectomy is performed to obtain adequate nodal sampling as metastasis is common. Adjuvant chemotherapy is also recommended in select cases.
We present a case of appendiceal goblet cell adenocarcinoma presenting with diarrhea diagnosed by colonoscopy and managed with right hemicolectomy, and adjuvant chemotherapy. Figure 3. The tumor is composed of goblet-like mucinous cells growing in small cohesive groups that lack lumina (example with black arrow). Nuclear atypia is mild and there are infrequent mitoses. (Hematoxylin and eosin stain, 100x).