P0978 (S1927). - Collagenous Gastritis With Esophageal Involvement: An Unusual Cause of Dysphagia 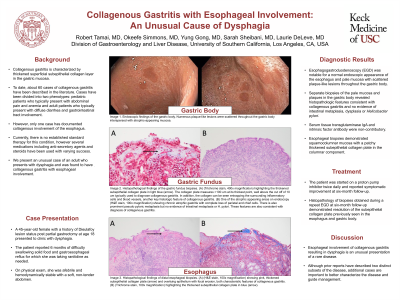 Introduction: Collagenous gastritis is characterized by thickened superficial subepithelial collagen layer in the gastric mucosa. To date, about 60 cases of collagenous gastritis have been described in the literature. Cases have been divided into two phenotypes: pediatric patients who typically present with abdominal pain and anemia and adult patients who typically present with diffuse diarrhea and gastrointestinal tract involvement. However, only one case has documented collagenous involvement of the esophagus. Currently, there is no established standard therapy for this condition, however several medications including anti-secretory agents and steroids have been used with varying success. We present an unusual case of an adult who presents with dysphagia and was found to have collagenous gastritis with esophageal involvement.

Methods: A 45-year-old female with a history of Dieulafoy lesion status post partial gastrectomy at age 18 presented to clinic with dysphagia. The patient reported 6 months of difficulty swallowing solid food and gastroesophageal reflux for which she was taking ranitidine as needed.  On physical exam, she was afebrile and hemodynamically stable with a soft, non-tender abdomen. Esophagogastroduodenoscopy (EGD) was notable for a normal endoscopic appearance of the esophagus and pale mucosa with scattered plaque-like lesions throughout the gastric body.  Esophageal biopsies demonstrated squamocolumnar mucosa with a patchy thickened subepithelial collagen plate in the columnar component.  Separate biopsies of the pale mucosa and plaques in the gastric body revealed histopathologic features consistent with collagenous gastritis and no evidence of intestinal metaplasia, dysplasia or Helicobacter pylori. Serum tissue transglutaminase IgA and intrinsic factor antibody were non-contributory.  She was started on a proton pump inhibitor twice daily and reported symptomatic improvement at six-month follow-up.  Histopathology of biopsies obtained during a repeat EGD at six-month follow-up demonstrated resolution of the subepithelial collagen plate previously seen in the esophagus and gastric body.

Discussion: Esophageal involvement of collagenous gastritis resulting in dysphagia is an unusual presentation of a rare disease. Although prior reports have described two distinct subsets of the disease, additional cases are important to better characterize the disease and guide management.

Image 2. Histopathological findings of the gastric fundus biopsies. (A) (Trichrome stain, 400x magnification) highlighting the thickened subepithelial collagen plate in light blue (arrow). The collagen plate measures >100 um at its thickest point, well above the cut off of 10 um typically used to diagnose collagenous gastritis. In addition, the collagen can be seen entrapping the surrounding inflammatory cells and blood vessels, another key histologic feature of collagenous gastritis. (B) One of the atrophic appearing areas on endoscopy (H&E stain, 100x magnification) showing chronic atrophic gastritis with complete loss of parietal and chief cells. There is also prominent pseudo pyloric metaplasia but no evidence of intestinal metaplasia or H. pylori. These features are also consistent with diagnosis of collagenous gastritis.