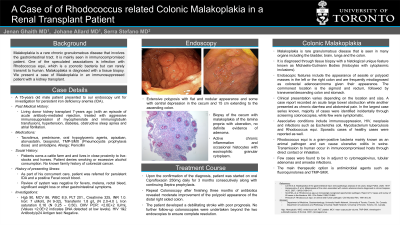 Introduction: Malakoplakia is a rare disease that involves the gastrointestinal tract. It is seen in immunocompromised patients. Chronic bacterial infections such as Escherichia coli, Proteus mirabilis, and Mycobacterium tuberculosis can lead to malakoplakia. Rarely, rhodococcus Equi, a zoonotic bacterium, is believed to be the infectious culprit. Malakoplakia is diagnosed with tissue biopsy and cultures. We present a case of colonic malakoplakia mimicking malignancy in an immunosuppressed patient with a kidney transplant.

Methods: A 75-years old male patient with a kidney transplant on tacrolimus and prednisone was referred to our department for work-up of iron deficiency anemia. He was also known for hypertension, diabetes, obstructive and atrial fibrillation. He is a farmer and lives in close proximity to live stocks and horses. He has suffered acute antibody rejection shortly after the transplant which required transient intensification of his immunosuppression with Mycophenolic Acid and Immunoglobulin transfusion. A diagnostic colonoscopy revealed extensive flat and polypoid lesions with a nodular pattern in the cecum and proximal colon. The endoscopic appearance was consistent with granular lateral spreading tumor (LST). Biopsies were obtained and pathology have confirmed malakoplakia secondary to rhodococcus infection. He was treated with three months course of Ciprofloxacin resulting in partial resolution. He is currently receiving a prolonged antibiotic course with a planned colonoscopy follow-up.

Discussion: Malakoplakia is a rare granulomatous disease that affects many organs including the bladder, brain, lungs, and the colon. It is diagnosed through unique histological features known as Michaelis-Gutmann Bodies (histocytes with cytoplasmic inclusions). Endoscopic features include large nodular sessile or polypoid masses in the colon, which is easily misinterpreted as colonic neoplasia. It is associated with immunosuppression, HIV, malignancy, and chronic infections. However, sporadic cases of healthy subjects were reported. Rhodoccus equi is a gram-positive bacteria mainly known as an animal pathogen known to trigger ulcerative colitis in swine. Transmission to humans occurs through direct contact or inhalation. Clinical presentation is nonspecific and depends on location and size. A case report recorded an acute large bowel obstruction while another manifested as chronic diarrhea and abdominal pain. Treatment is limited to antimicrobial agents and supporting the immune system. 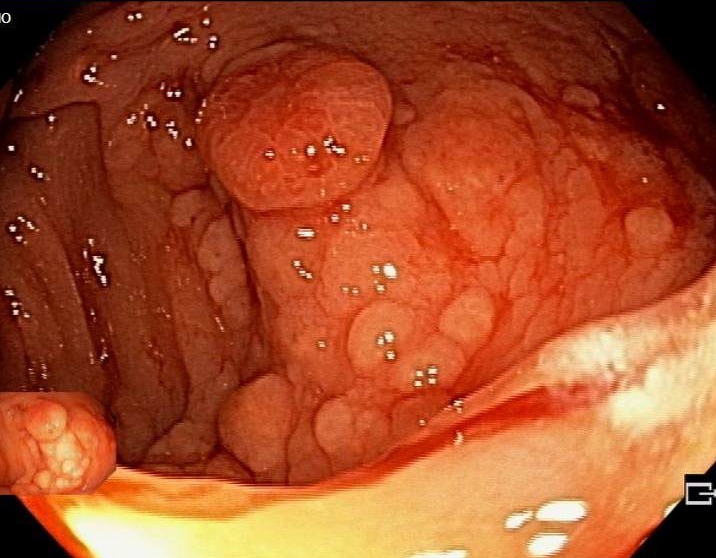 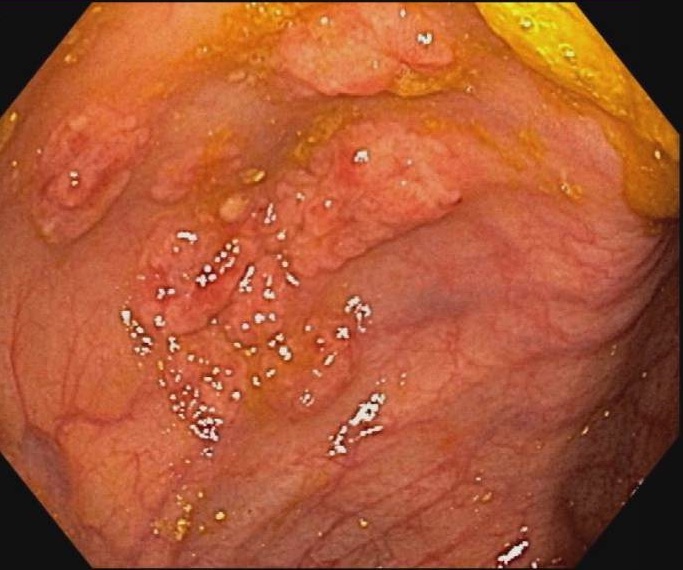 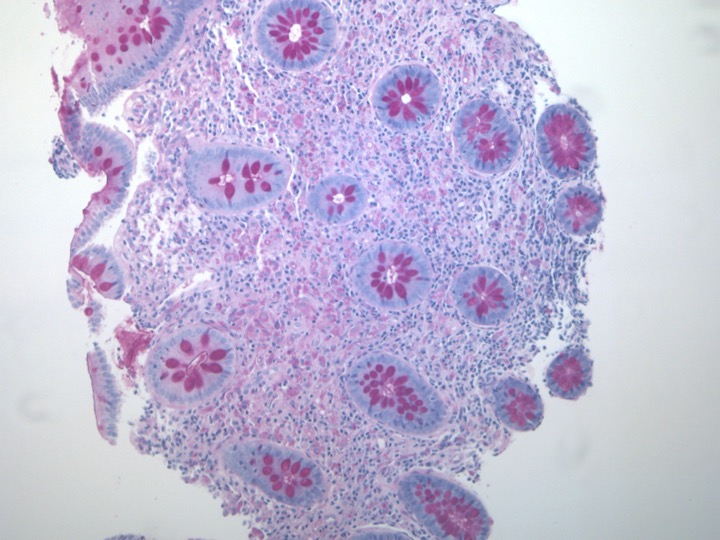