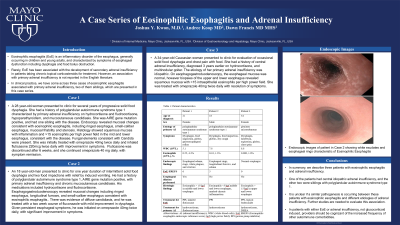 Methods: We reviewed cases at Mayo Clinic Florida with the diagnosis of both EoE and primary adrenal insufficiency. Information gathered included sex, age at diagnosis, symptoms, white blood cell and eosinophil count, endoscopic and histological findings, EoE endoscopic reference score, and treatment including medical and procedural therapies.Three cases were identified and reviewed in the electronic medical record. The average age at diagnosis was 25.3 years, and two patients were female.  Patients B and C were siblings with primary adrenal insufficiency associated with polyglandular autoimmune syndrome type 1, an inherited autoimmune disorder with multi-system effects including primary adrenal insufficiency and chronic mucocutaneous candidiasis. Both exhibited evidence of esophageal candidiasis. All patients presented with dysphagia and globus sensation, and one had peripheral eosinophilia (patient B). Despite esophageal symptoms, one patient had normal endoscopic findings with characteristic findings of eosinophils on histology. The other two patients had characteristic mucosal changes of EoE including ringed and small-caliber esophagus with areas of stenosis. Their endoscopic reference scores were 3 and 5. All patients were treated with omeprazole 40mg twice daily, one patient with inhaled fluticasone 220mcg twice daily, and one with oral budesonide 3mg twice daily. One patient underwent dilation of an esophageal stricture.

Discussion: Primary adrenal insufficiency has been associated with peripheral eosinophilia, seen in one of our study patients. Two patients were siblings with an inherited autoimmune disorder. All patients had characteristic symptoms of eosinophilic esophagitis and evidence of eosinophilia on histology, and responded to treatment with a proton pump inhibitor or topical steroid. For patients with primary adrenal insufficiency, young age, and symptoms of dysphagia, eosinophilic esophagitis should be considered as an etiology of symptoms.  Further studies are needed to determine the pathogenesis and implications of this association. 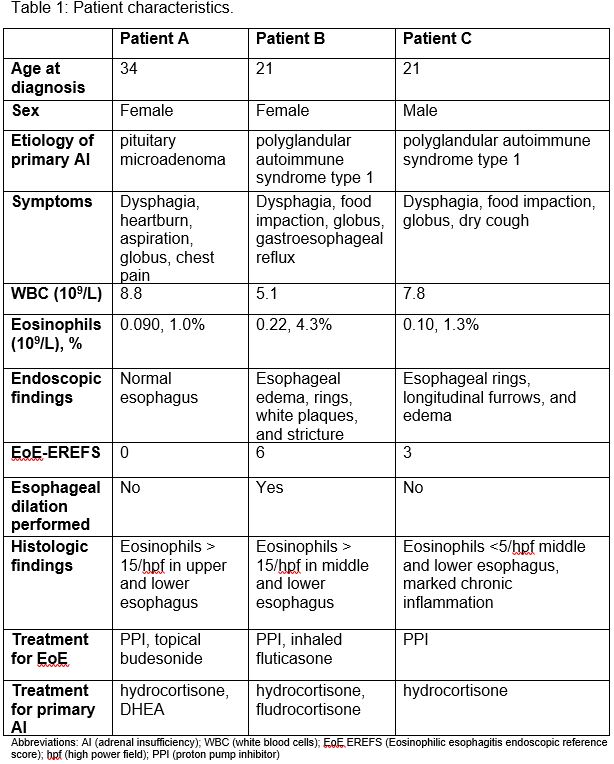