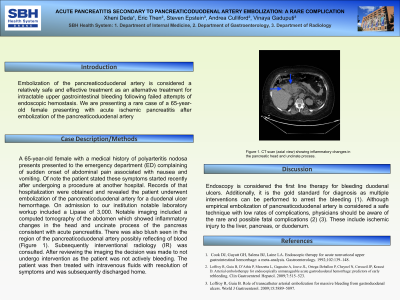 Introduction: Embolization of the pancreaticoduodenal is considered a relatively safe and effective treatment as an alternative treatment for intractable upper gastrointestinal bleeding following failed attempts of endoscopic hemostasis. We are presenting a rare case of a 65-year-old female presenting with acute ischemic pancreatitis after embolization of the pancreaticoduodenal artery.

Methods: A 65-year-old female with a medical history of polyarteritis nodosa presents presented to the emergency department (ED) complaining of sudden onset of abdominal pain associated with nausea and vomiting. Of note the patient stated these symptoms started recently after undergoing a procedure at an another hospital. Records of that hospitalization were obtained and revealed the patient underwent embolization of the pancreaticoduodenal artery for a duodenal hemorrhage. On admission to our institution notable laboratory workup included a Lipase of 3,000. Notable imaging included a computed tomography of the abdomen which showed inflammatory changes in the head and uncinate process of the pancreas consistent with acute pancreatitis. There was also blush seen in the region of the pancreaticoduodenal artery possibly reflecting of blood. Subsequently interventional radiology (IR) was consulted. After reviewing the imaging with the decision was made to not undergo intervention as the patient was not actively bleeding. The patient was then treated with intravenous fluids with resolution of symptoms and was subsequently discharged home.

Discussion: Endoscopy is considered the first line therapy for bleeding duodenal ulcers. Additionally, it is the gold standard for diagnosis as multiple interventions can be performed to arrest the bleeding. Although empirical pancreaticoduodenal is considered a safe technique with low rates of complications, physicians should be aware of the rare and possible fatal complications. These include ischemic injury to the liver, pancreas, or duodenum.