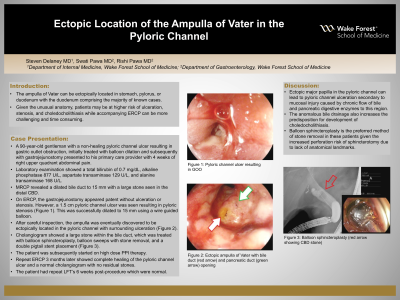 Introduction: The ampulla of Vater can be ectopically located in stomach, pylorus, or duodenum with the duodenum comprising the majority of cases. The prevalence of this abnormality is rare, nonetheless it has important clinical ramifications. Given the unusual anatomy, patients may be at higher risk of ulceration, stenosis, and choledocholithiasis while accompanying ERCP can be more challenging and time consuming.

Methods: A 90-year-old gentleman presented to his PCP with 4 weeks of RUQ abdominal pain. His past medical history was significant for a non-healing pyloric channel ulcer resulting in gastric outlet obstruction, initially treated with balloon dilation and subsequently with gastrojejunostomy. Laboratory examination showed a total bilirubin of 0.7, ALP 877, AST 129, and ALT 168. MRCP revealed a dilated bile duct to 15 mm with a large stone seen in the distal CBD. On ERCP, the gastrojejunostomy appeared patent without ulceration or stenosis. However, a 1.5 cm pyloric channel ulcer was seen resulting in pyloric stenosis (Figure 1). This was successfully dilated to 15 mm using a wire guided balloon with subsequent advancement of the duodenoscope into the second portion of the duodenum. After careful inspection, the ampulla was eventually discovered to be ectopically located in the pyloric channel with surrounding ulceration (Figure 2). Cholangiogram showed a large stone within the bile duct, which was treated with balloon sphincteroplasty, balloon sweeps with stone removal, and a double pigtail stent placement (Figure 3). The patient was subsequently started on high dose PPI therapy. Repeat ERCP in 3 months showed complete healing of the pyloric channel ulcer and a normal cholangiogram with no residual stones. Patient had repeat LFT’s 6 weeks post-procedure which were normal.

Discussion: Ectopic major papilla in the pyloric channel can lead to pyloric channel ulceration secondary to mucosal injury caused by chronic flow of bile and pancreatic digestive enzymes to this region. The anomalous bile drainage also increases the predisposition for development of choledocholithiasis. Balloon sphincteroplasty is the preferred method of stone removal in these patients given the increased perforation risk of sphincterotomy due to lack of anatomical landmarks. 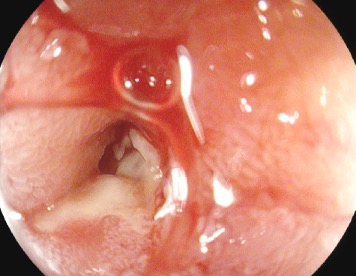 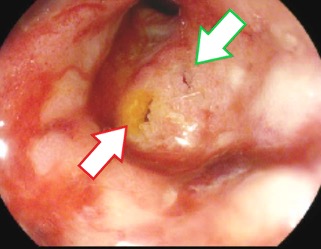 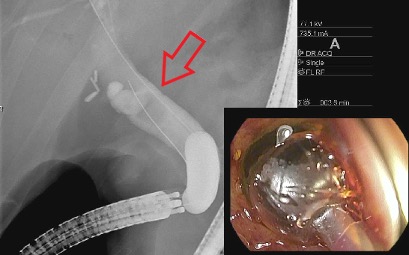