Introduction: Granular cell tumors (GCTs) are rare, soft tissue neoplasms arising from Schwann cells and can be found anywhere in the body. Gastrointestinal GCTs represent 6-10% of all cases with the majority arising in the esophagus. On endoscopy, GCTs appear as white-grey or a yellow subepithelial lesion. Most GCTs are benign, but approximately 0.5-2% of cases progress to malignancy and carry a poor prognosis. Eosinophilic esophagitis (EoE) is a chronic, immune-mediated condition characterized by eosinophil-predominant inflammation of the esophagus. We present three cases of esophageal GCTs diagnosed endoscopically in the setting of EoE.

Case 2:
A 38 year-old male with a history of biopsy-proven EoE presented for a follow up EGD after receiving PPI therapy for twelve weeks. EGD revealed a normal esophagus (Fig 2); however, random biopsies revealed incidental GCT in the mid-esophagus.

Case 3:
A 33 year-old male with a history of childhood environmental allergies presented with chronic dysphagia and intermittent solid food impaction. On EGD, the esophagus appeared normal. However, random biopsies from the mid esophagus showed eosinophilia consistent with EoE as well as a GCT. Therefore, repeat EGD was performed with white light along with endoscopic ultrasound to further evaluate for GCT and revealed a 2 mm submucosal lesion (Fig 3).

Discussion: The relationship between GCT and EoE remains unclear. Previously, case reports noted the simultaneous finding of GCT in patients with EoE on EGD. Here, we present three different endoscopic findings of esophageal GCT. Most notably, in two cases GCT was not diagnosed visually, but rather histologically. These cases add to the growing body of literature associating EoE and GCT, though a pathophysiologic relationship has not yet been drawn. Whether the presence of GCT in these cases is completely incidental or immune-mediated is unknown. Thus, as the prevalence of EoE continues to increase, clinicians should be aware of the association between GCT and EoE. 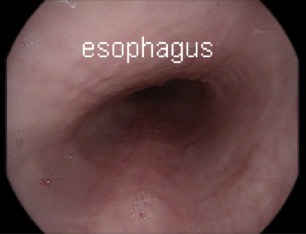 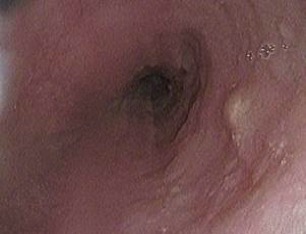