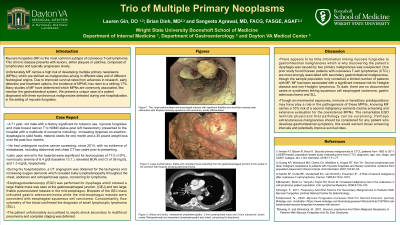 Introduction: Mycosis fungoides (MF) is the most common subtype of cutaneous T-cell lymphoma (CTCL).Patients with MF have a higher risk of developing multiple primary neoplasms (MPNs); which are defined as malignancies arising in different sites and of different histological origins. Gastrointestinal tract has rarely been implicated as the site of these malignancies.  We present a unique case of a patient diagnosed with three synchronous malignancies detected during one hospitalization, in the setting of mycosis fungoides.

Methods: A 71-year-old male with a history significant for mycosis fungoides and male breast cancer status-post mastectomy presented with complaints of  increasing dyspnea, dysphagia to solid foods, melanotic stools and a 30 pound weight loss.  Labs were significant for leukocytosis of 17.0 x109/L and normocytic anemia of 6.4 g/dl. A CT angiogram obtained to rule out pulmonary embolism revealed bulky lymphadenopathy throughout the chest. Esophagogastroduodenoscopy (EGD) performed showed a large friable mass seen at the gastroesophageal junction (GEJ) and two large pedunculated masses in the mid-esophagus. Biopsies of the GEJ mass indicated gastric adenocarcinoma and biopsies of the esophageal masses were consistent with squamous cell carcinoma. Concomitantly, flow cytometry of the blood confirmed small lymphocytic lymphoma (SLL). The patient unfortunately succumbed to septic shock secondary to multifocal pneumonia and complete staging was deferred.

Discussion: There appears to be limited information connecting mycosis fungoides to gastrointestinal malignancies in the United States. There are no documented cases or syndromes linking squamous cell esophageal carcinoma, gastric adenocarcinoma and SLL.  However, in one retrospective Korean study an association was noted between MF and gastrointestinal malignancies, primarily colorectal and gastric. Though environmental exposures, immune or hereditary predispositions may have played a role in the pathogenesis of these MPNs; knowing MF carries a 10% risk of a second malignancy warrants routine screening and extensive evaluation for the coexistence of gastrointestinal MPNs. This is due to a likely unreported or underestimated relationship caused a delay in diagnosis. This case emphasizes the connection between extracutaneous malignancies of the gastrointestinal system and mycosis fungoides. 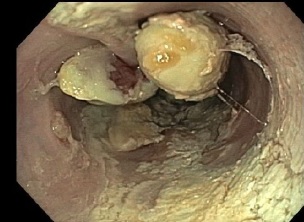 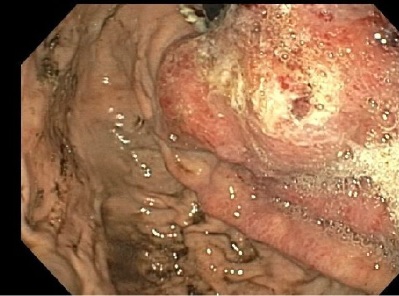 Large erythematous, friable and ulcerated mass extending from the gastroesophageal junction to the cardia of the stomach with biopsies showing adenocarcinoma.