P0324 (S1568). - A Rare Cause of a Common Disease: Metastatic Lung Cancer Presenting as Acute Pancreatitis 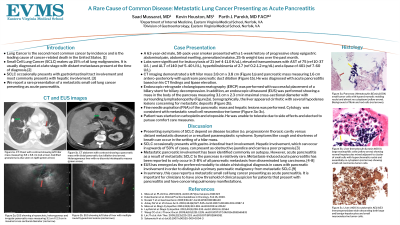 Introduction: Lung cancer is the second most common cancer and is the leading cause of cancer-related death in the United States.1 Small Cell Lung Cancer (SCLC) makes up 15% of lung malignancies.2 It is usually diagnosed at a late stage with distant metastases mostly present at the time of diagnosis.

Methods: A sixty-three-year-old male with multiple medical comorbidities presented with symptoms of generalized malaise, weight loss, sharp upper abdominal pain and swelling. His labs were significant for leukocytosis, elevated transaminases, hyperbilirubinemia and lipase level of 401 U/L (Normal range 7-60 U/L).Subsequent imaging demonstrated a left hilar mass measuring 3.8 cm x 3.8 cm (Figure 1a) and pancreatic mass measuring 1.6 cm antero-posteriorly with upstream pancreatic duct dilation (Figure 1b).Endoscopic retrograde cholangiopancreatography (ERCP) was performed with successful placement of a biliary stent. In addition, an endoscopic ultrasound (EUS) was performed which demonstrated a mass in the body of the pancreas measuring 3.1 cm x 2.3 cm in maximal cross-sectional diameter with surrounding lymphadenopathy (Figure1d). Sonographically, the liver appeared cirrhotic with several hypodense lesions concerning for metastatic deposits (Figure 1c). Fine needle aspiration (FNA) of the pancreatic mass as well as the hepatic lesions was performed (Figure 2a-d). Cytology was consistent with metastatic small cell neuroendocrine tumor. He was started on carboplatin and etoposide. He was unable to tolerate due to side effects and elected to pursue comfort care measures.

Discussion: Presenting symptoms of SCLC depend on disease location (i.e. progression in thoracic cavity versus distant metastatic disease) or a resultant paraneoplastic syndrome. Symptoms like cough and shortness of breath can occur in the setting of a hilar mass. Hepatic involvement which can occur in upwards of 50% of cases, can present as obstructive jaundice and carries a poor prognosis3. While metastasis to pancreas has been identified on autopsy, an index presentation of acute pancreatitis as a result of metastatic SCLC to the pancreas is relatively rare.4–8 EUS has emerged as the preferred modality to obtain a histological diagnosis in cases with pancreatic involvement in order to distinguish a primary pancreatic malignancy from metastatic SCLC. 9 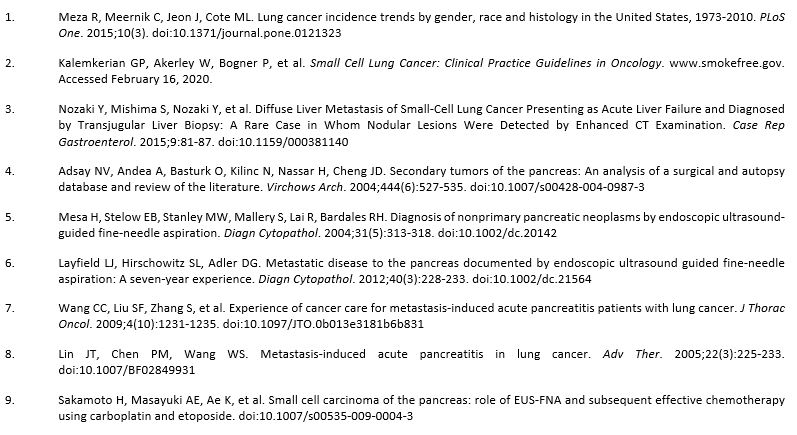