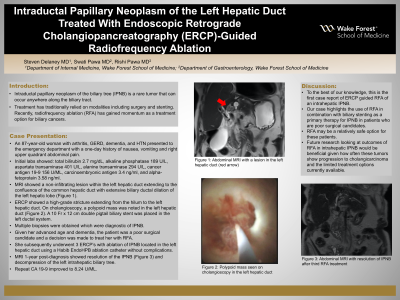 Introduction: Intraductal papillary neoplasm of the biliary tree (IPNB) is a rare tumor that can occur anywhere along the biliary tract. Treatment has traditionally relied on modalities including surgery and stenting. Recently, radiofrequency ablation (RFA) has gained momentum as a treatment option for biliary cancers. Prior studies examining the effect of RFA on biliary tumors typically group all tumors together, leaving few reports looking at sole outcomes in IPNB.

Methods: An 87-year-old woman with arthritis, GERD, dementia, and HTN presented to the ED with a one day history of nausea, vomiting and RUQ abdominal pain. Laboratory examination revealed a total bilirubin of 2.7, ALP 189, AST 401, ALT 294, CA 19-9 156, CEA 3.4, and AFP 3.58. MRCP showed a 21 mm x 31 mm non-infiltrating lesion within the left hepatic duct extending to the confluence of the common hepatic duct with extensive biliary ductal dilation of the left hepatic lobe (figure 1). ERCP showed a high grade stricture extending from the hilum to the left hepatic duct. On cholangioscopy, a polypoid mass was noted in the left hepatic duct (figure 2). Multiple biopsies were obtained which were diagnostic of IPNB. A 10 Fr x 12 cm double pigtail biliary stent was placed in the left ductal system. Given her advanced age and dementia, the patient was thought to be a poor surgical candidate and a decision was made to treat her with RFA. She subsequently underwent 3 ERCP’s with ablation of IPNB located in the left hepatic duct using a Habib EndoHPB ablation catheter without complications. A follow-up MRI 1 year post-diagnosis showed improvement and regression of the left intrahepatic intraductal mass to 9.6 mm X 10.6 mm (figure 3) and decompression of the left intrahepatic biliary tree. Repeat CA 19-9 improved to 8.24.

Discussion: To the best of our knowledge, this is the first case report of ERCP guided RFA of an intrahepatic IPNB. Our case highlights the use of RFA in combination with biliary stenting as a primary therapy for IPNB in patients who are poor surgical candidates. 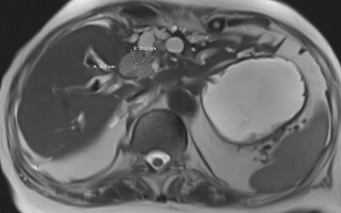 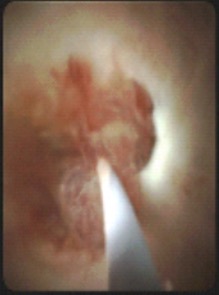 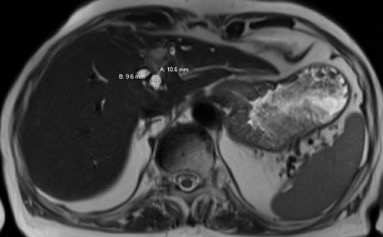