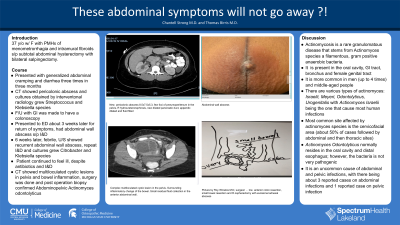 Introduction: Actinomycosis is a rare granulomatous disease. Actinomyces species are present in the oral cavity, GI tract, bronchus and female genital tract. The different species include Israelii, Meyeri, Odontolyticus, Urogenitalis. A. Odontolyticus is an uncommon cause of abdominal and pelvic infections.

Methods: A 37-year-old female with history of recent subtotal abdominal hysterectomy and bilateral salpingectomy presented to the ED with diarrhea and abdominal pain. She was tachycardic and had a diffusely tender abdomen. The labs revealed leukocytosis and elevated inflammatory markers. CT scan revealed an 8 cm pericolonic abscess, inflammation and mild dilation of distal small bowel, R hydroureteronephrosis and dilated fluid filled appendix. Interventional radiology placed a drain. The cultures grew Streptococcus Anginosus and Klebsiella Aerogenes. She was discharged on Bactrim but returned to the ED prior to scheduled follow-up with abdominal pain and thick yellow, foul-smelling drainage from the drain site. Surgery performed an I&D of the abdominal wall abscess at bedside and the patient was discharged home on Augmentin. Two months later, she developed fever, tenderness and swelling at the site. A repeat I&D was performed, and antibiotic coverage was broadened based on culture results, but she continued to feel ill. A CT scan was repeated and revealed a complex multiloculated cystic lesion in the pelvis, surrounding inflammatory changes of the bowel and residual fluid collection in the anterior abdominal wall. She proceeded to low anterior colon resection, small bowel resection and R oophorectomy with excision of adnexal abscess. The cultures revealed Actinomyces Odontolyticus and pathology revealed small bowel and right adnexa abscesses and ruptured diverticulum of the rectosigmoid with abscess formation.

Discussion: There are only 3 reported cases of abdominal infections and 1 of pelvic infection secondary to A. Odontolyticus. They involved IUD placement, inflammatory bowel disease, fistula formation and suture complications. There are only 2 reported cases of abdominal actinomycosis following hysterectomy. We present the first reported case of A. Odontolyticus causing abdominal and pelvic actinomycosis following hysterectomy. This diagnosis is a difficult one to make due to variable clinical presentations. Thus, preoperative diagnosis is rare.