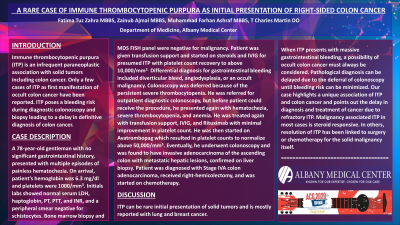 Introduction: Immune thrombocytopenic purpura (ITP) is an infrequent paraneoplastic syndrome associated with solid tumors including colon cancer. Only a few cases of ITP are reported as the first manifestation of occult colon cancer. ITP poses a bleeding risk during diagnostic colonoscopy and biopsy leading to a delay in definitive diagnosis of colon cancer.

Methods: A 78-year-old gentleman with no significant gastrointestinal history, presented with multiple episodes of painless hematochezia. On arrival, the patient’s hemoglobin was 6.3 mg/dL and platelets were 1000/mm3. Initials labs showed normal serum LDH, haptoglobin, PT, PTT, INR, and a peripheral smear negative for schistocytes.  Bone marrow biopsy and MDS FISH panel were negative for malignancy. The patient was given transfusion support and started on steroids and IVIG for presumed ITP with platelet count recovery to above 10,000/mm3. Differential diagnosis for gastrointestinal bleeding included diverticular bleed, angiodysplasia, or an occult malignancy. Colonoscopy was deferred because of the persistent severe thrombocytopenia. He was referred for outpatient diagnostic colonoscopy, but before the patient could receive the procedure, he presented again with hematochezia, severe thrombocytopenia, and anemia. He was treated again with transfusion support, IVIG, and Rituximab with minimal improvement in platelet count. He was then started on Avatrombopag which resulted in platelet counts above 50,000/mm3. Eventually, he underwent colonoscopy and was found to have invasive adenocarcinoma of the ascending colon. Further abdominal imaging revealed metastatic hepatic lesions, later confirmed via liver biopsy. Patient was diagnosed with Stage IVA colon adenocarcinoma arising from ascending colon, received right-hemicolectomy, and was started on chemotherapy.

Discussion: ITP can be rare initial presentation of solid tumors and is mostly reported with lung and breast cancer. When ITP presents with massive gastrointestinal bleeding, a possibility of occult colon cancer must always be considered. Pathological diagnosis can be delayed due to the deferral of colonoscopy until bleeding risk can be minimized. Our case highlights a unique association of ITP and colon cancer and points out the delay in diagnosis and treatment of cancer due to refractory ITP. Malignancy associated ITP in most cases is steroid responsive. In others, resolution of ITP has been linked to surgery or chemotherapy for the solid malignancy itself.