P1082 (S2031). - Esophageal Polyps Associated With Barrett’s Esophagus: Is This an Adenocarcinoma or Not? 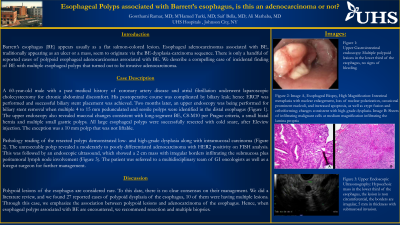 Methods: A 60-year-old male with a past medical history of coronary artery disease and atrial fibrillation underwent laparoscopic cholecystectomy for chronic abdominal discomfort. His postoperative course was complicated by biliary leak; hence ERCP was performed and successful biliary stent placement was achieved. Two months later, an upper endoscopy was being performed for biliary stent removal when multiple 4 to 15 mm pedunculated and sessile polyps were identified in the distal esophagus (Figure 1). The upper endoscopy also revealed mucosal changes consistent with long-segment BE, C8-M10 per Prague criteria, a small hiatal hernia and multiple small gastric polyps. All large esophageal polyps were successfully resected with cold snare, after Eleview injection. The exception was a 10 mm polyp that was not liftable.
Pathology reading of the resected polyps demonstrated low- and high-grade dysplasia along with intramucosal carcinoma (Figure 2). While the unresectable polyp revealed a moderately to poorly differentiated adenocarcinoma with HER2 positivity on FISH analysis. This was followed by an endoscopic ultrasound, which showed a 2 cm mass with irregular borders infiltrating the submucosa plus peritumoral lymph node involvement (Figure 3). The patient was referred to a multidisciplinary team of GI oncologists as well as a foregut surgeon for further management.

Discussion: Polypoid lesions of the esophagus are considered rare. To this date, there is no clear consensus on their management. We did a literature review, and we found 27 reported cases of polypoid dysplasia of the esophagus, 10 of them were having multiple lesions. The table is showing their characteristics and outcome. Through this case, we emphasize the association between these polypoid lesions and the adenocarcinoma of the esophagus. Hence, when esophageal polyps associated with BE are encountered, we are recommending their resection associated to multiple biopsies. 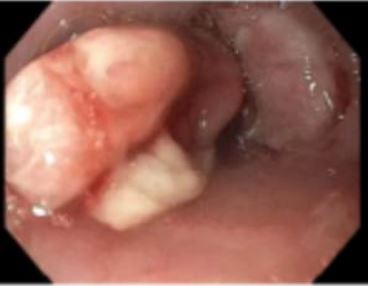 Upper Gastrointestinal endoscopy: Multiple polypoid lesions in the lower third of the esophagus, no signs of bleeding. 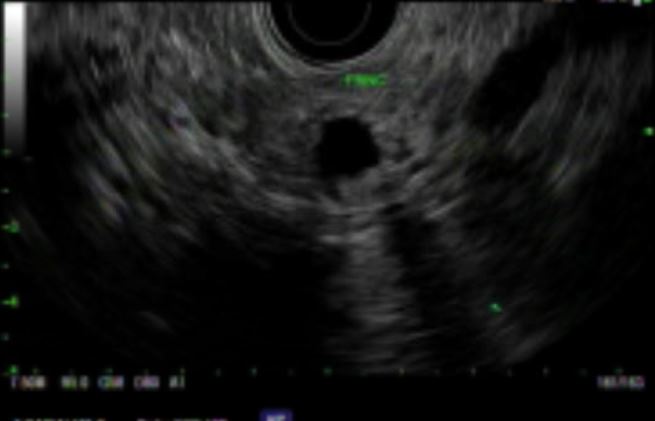 Upper Endoscopic Ultrasonography: Hypoechoic mass in the lower third of the esophagus, the lesion is non circumferential, the borders are irregular, 5 mm in thickness with submucosal invasion.