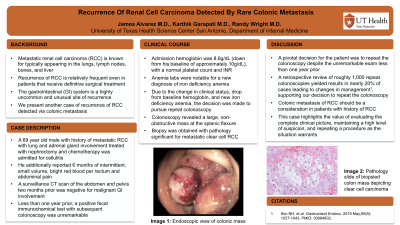 Introduction: Metastatic renal cell carcinoma is known for manifesting in the lungs, lymph nodes, bone, and liver. Recurrence rates in patients with definitive surgical treatments are estimated to be 20-40% of cases. The gastrointestinal system is an unusual location for metastatic disease with one study noting fewer than 15 cases in the literature. Here, we present another case of a patient with recurrent renal cell carcinoma detected via colonic metastasis.

Methods: A 69 year old male with past medical history of metastatic renal cell carcinoma (lungs, left adrenal gland) treated with left nephrectomy (2018) and chemotherapy, coronary artery disease, hypertension, and chronic kidney disease III was admitted to the hospital for cellulitis.
During hospitalization, he reported a 6 month history of intermittent, small volume, hematochezia and left sided abdominal pain. He was not taking anticoagulation medications. Labs were significant for hemoglobin 8.6 g/dL (down from a baseline of approximately 10 g/dL), normal platelets, and normal INR. Anemia workup was consistent with iron deficiency anemia. A surveillance CT of the abdomen 2 months prior did not note malignant involvement of the GI tract. One year earlier, he had a positive fecal immunochemical test resulting in a colonoscopy only revealing hyperplastic polyps.
Due to the patient’s persistent symptoms, decrease in baseline hemoglobin, and new iron deficiency anemia, we elected to repeat the colonoscopy despite having a negative colonoscopy within the last year. Colonoscopy revealed a large, non-obstructive mass at the splenic flexure. Pathology confirmed metastatic clear renal cell carcinoma. The patient was referred back to his Medical Oncologist to discuss surgical and medical options.

Discussion: The case above depicts a rare form of recurrence of renal cell carcinoma with metastatic disease involving the colon. In a recent case series, patients typically present with a combination of abdominal pain, hematochezia, and anemia. In addition, a retrospective review of nearly 20,000 colonoscopies, nearly 1,000 of which were repeat colonoscopies, when bleeding occurs, repeating a colonoscopy yielded a new diagnosis in up to 20% of patients supporting our decision to repeat the procedure. This case highlights the value of monitoring patients’ symptoms and labs while maintaining a high level of clinical suspicion, and repeating procedures as the clinical presentation warrants. 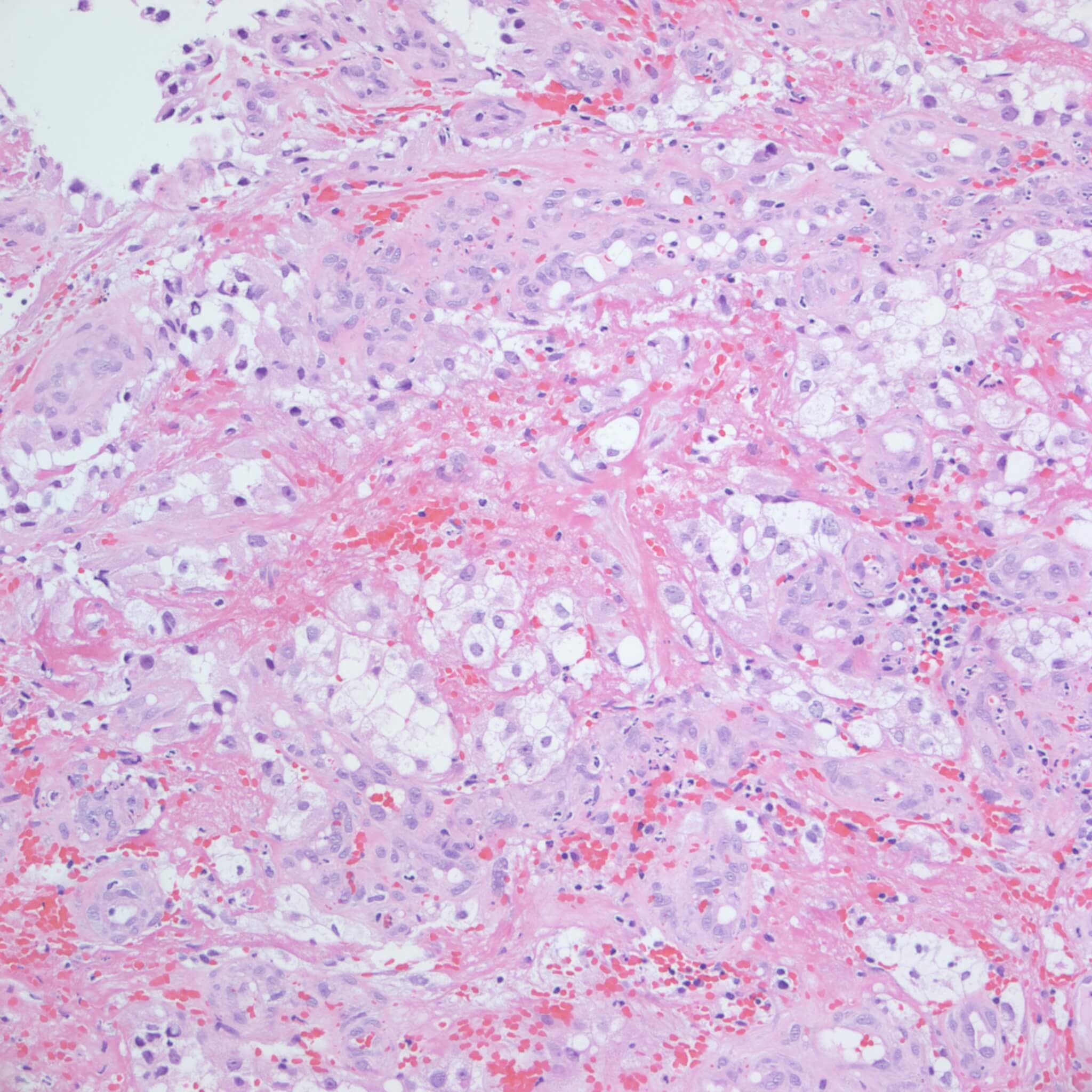