P0786 (S0343). - Artificial Sweeteners Are Associated With Reduced Odds of Gastrointestinal Luminal Cancers, Based on a Systematic Review and Meta-Analysis 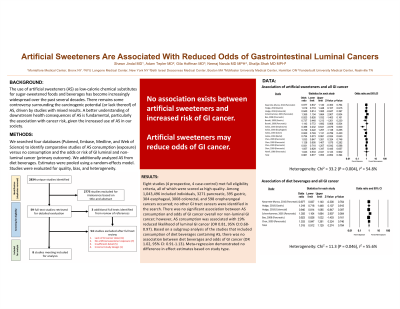 Introduction: The use of artificial sweeteners (AS) as low-calorie chemical substitutes for sugar-sweetened foods and beverages has become increasingly widespread over the past several decades. There remains some controversy surrounding the carcinogenic potential (or lack thereof) of AS, driven by studies with mixed results. A better understanding of downstream health consequences of AS is fundamental, particularly the association with cancer risk, given the increased use of AS in our society. Accordingly, we aimed to perform a systematic review and meta-analysis to estimate the association between AS consumption and risk of gastrointestinal (GI) cancers overall, and stratified according to non-luminal vs luminal GI tract cancer.

Methods: We searched four databases (Pubmed, Embase, Medline, and Web of Science) to identify comparative studies of AS consumption (exposure) versus no consumption and the odds or risk of GI luminal and non-luminal cancer (primary outcome). We additionally analyzed AS from diet beverages. Estimates were pooled using a random-effects model. Studies were evaluated for quality, bias, and heterogeneity.

Results: Eight studies (4 prospective, 4 case-control) met full eligibility criteria, all of which were scored as high-quality. Among 1,043,496 included individuals, 3271 pancreatic, 395 gastric, 304 esophageal, 3008 colorectal, and 598 oropharyngeal cancers occurred; no other GI tract cancers were identified in the search. There was no significant association between AS consumption and odds of GI cancer overall nor non-luminal GI cancer; however, AS consumption was associated with 19% reduced likelihood of luminal GI cancer (OR 0.81, 95% CI:0.68-0.97). Based on a subgroup analysis of the studies that included consumption of diet beverages containing AS, there was no association between diet beverages and odds of GI cancer (OR 1.02, 95% CI: 0.91-1.13). Meta-regression demonstrated no difference in effect estimates based on study type.

Discussion: To our best knowledge, this is the first meta-analysis analyzing the association between AS, including a separate analysis of diet beverages, and GI cancers specifically. Overall, these data are congruent with the majority of contemporary epidemiological data demonstrating no association between AS and increased risk of cancer, although the modest reduction in luminal GI tract cancer warrants further investigation. Experimental studies defining the biological mechanisms of this association are similarly needed. 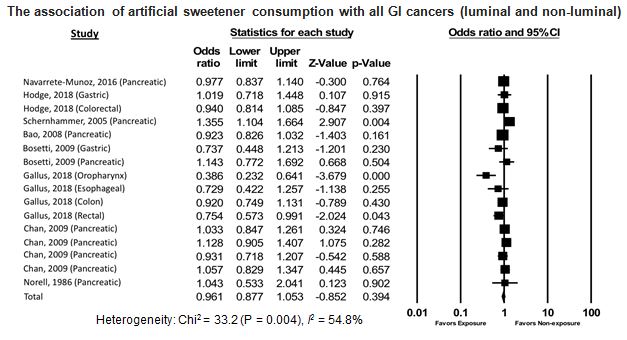