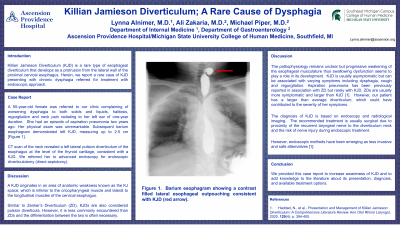 Introduction: Killian Jamieson Diverticulum (KJD) is a rare type of esophageal diverticulum that develops as a protrusion from the lateral wall of the proximal cervical esophagus. Herein, we report a rare case of KJD presenting with chronic dysphagia to be treated using a novel approach.

Methods: A 55-year-old female was referred to our clinic complaining of worsening dysphagia to both solids and liquids, halitosis, regurgitation and neck pain radiating to her left ear of one-year duration.  She had an episode of aspiration pneumonia two years ago. Her physical exam was unremarkable. Subsequent barium esophagram demonstrated left KJD, measuring up to 2.5 cm [Figure 1]. CT scan of the neck revealed a left lateral pulsion diverticulum of the esophagus at the level of the thyroid cartilage, consistent with a KJD. We referred her to advanced endoscopy for endoscopic diverticulotomy (direct septotomy).

Discussion: A KJD originates in an area of anatomic weakness known as the KJ space, which is inferior to the cricopharyngeal muscle and lateral to the longitudinal muscles of the cervical esophagus. Similar to Zenker’s Diverticulum (ZD), KJDs are also considered pulsion diverticula. However, it is less commonly encountered than ZDs and the differentiation between the two is often necessary.
The pathophysiology remains unclear but progressive weakening of the esophageal musculature thus swallowing dysfunction seems to play a role in its development. KJD is usually asymptomatic but can be associated with varying symptoms including dysphagia, cough and regurgitation. Aspiration pneumonia has been previously reported in association with ZD but rarely with KJD. ZDs are usually more symptomatic and larger than KJD [1]. However, our patient has a larger than average diverticulum, which could have contributed to the severity of her symptoms.

The diagnosis of KJD is based on endoscopy and radiological imaging.  The recommended treatment is usually surgical due to proximity of the recurrent laryngeal nerve to the diverticulum neck and the risk of nerve injury during endoscopic treatment.  However, endoscopic methods have been emerging as less invasive and safe alternatives [1]. We provided this case report to increase awareness of KJD and to add knowledge to the literature about its presentation, diagnosis, and available treatment options. 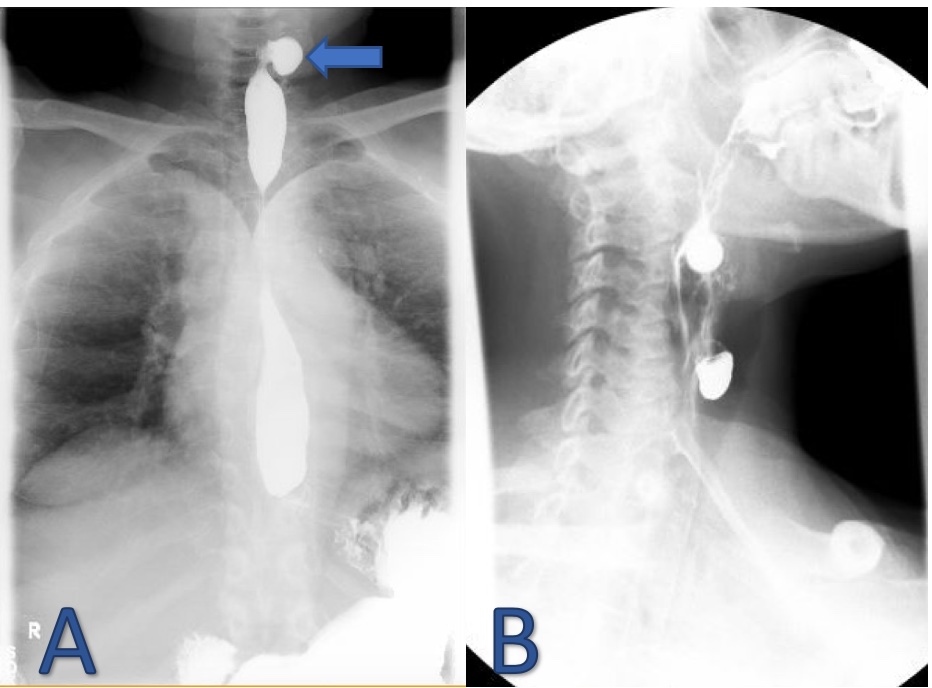