P0895 (S0421). - Lower Esophageal Sphincter Pressures Are Significantly Reduced in Patients With a Hiatal Hernia but No Major Abnormality on Esophageal Manometry 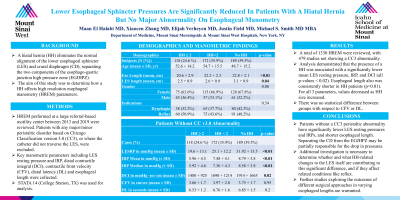 Introduction: A hiatal hernia (HH) eliminates the normal alignment of the lower esophageal sphincter (LES) and crural diaphragm (CD), separating the two components of the esophago-gastric junction high pressure zone (EGJHPZ). This separation may affect parameters measured during high resolution esophageal manometry (HREM), including measurements of resting lower esophageal sphincter (LES) pressure. The effect of a HH on LES relaxation, as measured by integrated relaxation pressure (IRP), is less well studied. The aim of this study was to determine how a HH affects HREM parameters.

Methods: HREM performed at a large referral-based motility center between 2013 and 2019 were reviewed. Patients with any major/minor peristaltic disorder based on Chicago Classification version 3.0 (CC3), or where the catheter did not traverse the LES, were excluded. Key manometric parameters including LES resting pressure and IRP, distal contractile integral (DCI), contractile front velocity (CFV), distal latency (DL) and esophageal length were collected. Patients were further subdivided into 3 groups according to HH size on HREM for analysis: no HH, HH 0.1-1.9cm, and HH ≥ 2 cm.

Discussion: In patients without a CC3 peristaltic abnormality, HH patients show significant decreases in LES resting pressure, IRP, and esophageal length. Separating the CD from the EGJHPZ may be partially responsible for the drop in pressures. However, HREM analysis software is supposed to isolate the LES from any CD contribution. Additional investigation is necessary to determine whether and what HH-related changes to the LES itself are contributing to this significant difference, and if they affect related conditions such as gastro-esophageal reflux. Shorter esophageal length may impact the success of a HH repair. Further studies exploring the outcomes of different surgical approaches in varying esophageal lengths are warranted.