P0894 (S0420). - Esophago-Gastric Outlet Obstruction in the Absence of a Hiatal Hernia Should Be Evaluated by Endoscopy and Impedance Planimetry 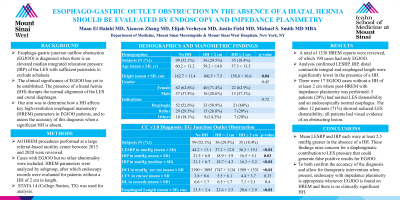 Introduction: Esophago-gastric junction outflow obstruction (EGJOO) is diagnosed on high resolution esophageal manometry (HREM) when there is an elevated median integrated relaxation pressure (IRP) of the lower esophageal sphincter (LES), but there is sufficient peristalsis to exclude achalasia. The clinical significance of EGJOO has yet to be established. The presence of a hiatal hernia (HH) disrupts the normal alignment of the LES and crural diaphragm. Our aim was to determine how a HH affects key HREM parameters in EGJOO patients, and to assess the accuracy of this diagnosis when a significant HH is absent.

Methods: All HREM procedures performed at a large referral-based motility center between 2013 and 2020 were reviewed. Cases with EGJOO but no other abnormality were included. They were divided into 3 groups according to HH length: no HH, HH 0.1-1.9 cm, and HH of at least 2 cm. HREM parameters were analyzed by subgroup, after which endoscopy records were evaluated for patients without a HH of at least 2 cm.

Results: A total of 1330 HREM reports were reviewed, of which 190 cases had only EGJOO (Table 1). There was no HH in 99 cases (52.1%), with 56 (29.5%) having a HH of 0.1-1.9 cm in length and 35 (18.4%) having a HH of at least 2 cm. Analysis demonstrated that LES resting pressure (LESRP), IRP, distal contractile integral and esophageal length were significantly lower in the presence of a HH (Table 2). There were 18 EGJOO cases without a HH of at least 2 cm where post-HREM impedance planimetry was performed (EndoFLIP 2.0, Medtronic GI Health, Sunnyvale CA). Of this group, all 5 patients (29%) with normal LES distensibility had an endoscopically normal esophagus with no visible obstruction. However, all 12 patients (71%) with reduced LES distensibility had visual evidence of an obstructing lesion such as a fibrotic ring or para-esophageal hernia.

Discussion: The mean LESRP and IRP each were at least 2.5 mmHg greater in the absence of a HH. These findings raise concern for a diaphragmatic contribution to LES pressure that could generate a false positive result of EGJOO, such as with the 5 of 17 cases that had normal impedance planimetry. The remaining patients all had evidence of an obstructing lesion. To both confirm the accuracy of the diagnosis and allow for therapeutic intervention when present, endoscopy with impedance planimetry is appropriate whenever EGJOO is found on HREM and there is no clinically significant HH.