P1088 (S2037). - A Rare Case of Dysphagia Mimicking Dysphagia Lusoria With a "Prominent" Vascular Pattern on Esophageal High-Resolution Manometry: Does It Matter? 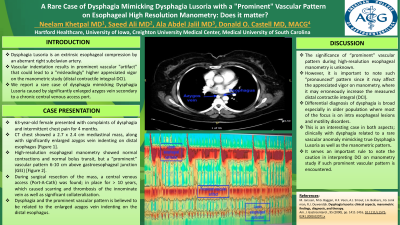 Introduction: Dysphagia secondary to extrinsic esophageal compression by an aberrant right subclavian artery is known as Dysphagia Lusoria. It is a condition where vascular indentation leads to difficulty swallowing, and also as a prominent vascular "artifact" on esophageal manometry, that could lead to a "misleadingly" higher appreciated vigor on the manometric study (distal contractile integral-DCI).We report a rare case of dysphagia mimicking Dysphagia Lusoria caused by significantly enlarged azygos vein secondary to a chronic central venous access port.

Methods: A 63 year-old female with history of thrombotic thrombocytopenic purpura presented with complaints of dysphagia and intermittent chest pain for 4 months.

The patient underwent surgical resection of the mediastinal mass, and pathology was suggestive of Castelman’s disease. At the time of surgery, a central venous access (Port-A-Catheter) was found; in place for > 10 years, which caused scarring and thrombosis/occlusion of the innominate vein as well as significant collateralization. Dysphagia and the prominent vascular pattern is believed to be related to the enlarged azygos vein indenting on the distal esophagus. Although the significance of “prominent” vascular pattern during high-resolution esophageal manometry is unknown, it is important to note such “pronounced” pattern since it may affect the appreciated vigor on manometry, where it may erroneously increase the measured distal contractile integral (DCI).

Differential diagnosis of dysphagia is broad especially in older population where most of the focus is on intra esophageal lesions and motility disorders. This is an interesting case in both aspects; clinically with dysphagia related to a rare vascular anomaly mimicking true Dysphagia Lusoria as well as the manometric pattern and serve an important rule to note the caution in interpreting DCI on manometry study if such prominent vascular pattern is encountered. 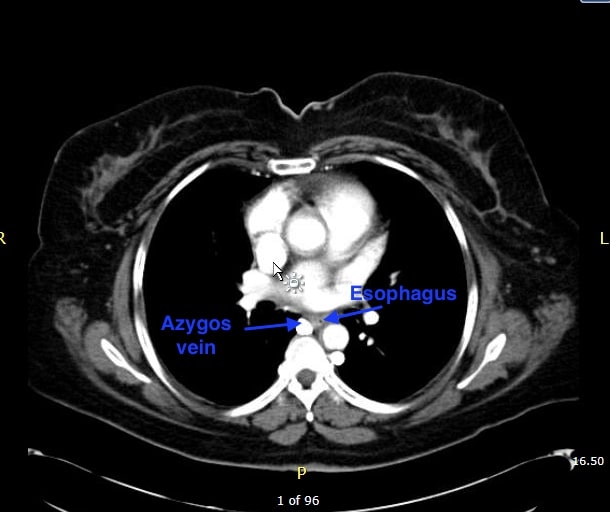 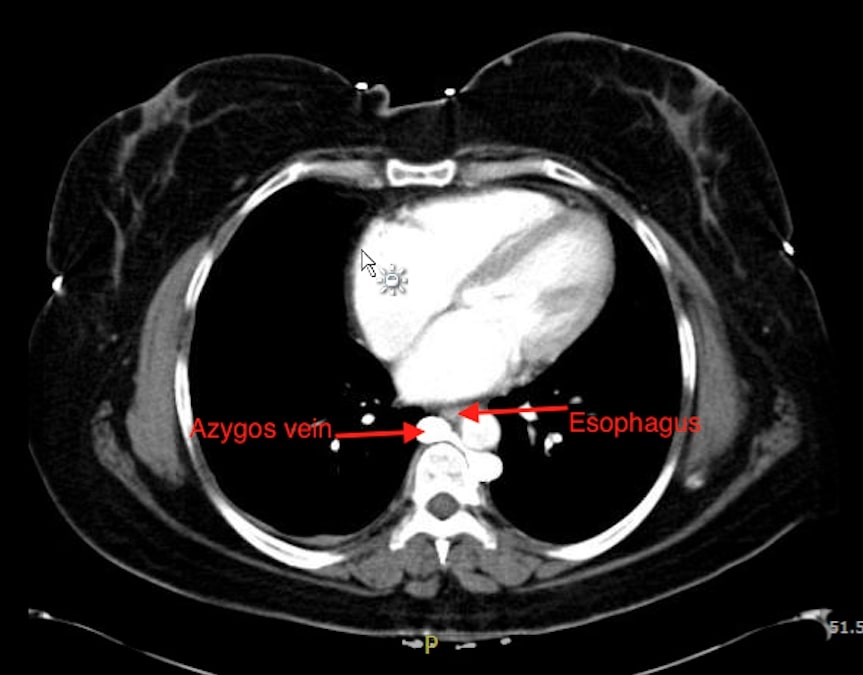