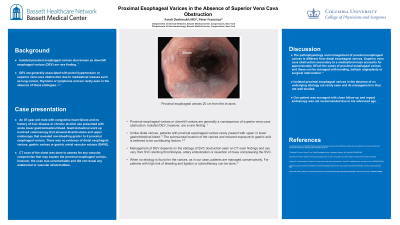 Methods: An 87-year-old male with congestive heart failure and no history of liver disease or chronic alcohol use presented with acute lower gastrointestinal bleed. Gastrointestinal work up involved colonoscopy that showed diverticulosis and upper endoscopy that revealed non-bleeding grade I to II proximal esophageal varices. There was no evidence of distal esophageal varices, gastric varices or gastric antral vascular ectasia (GAVE). Computed tomography scan of the chest was done to assess for any vascular compromise that may explain the proximal esophageal varices, however, the scan was unremarkable and did not reveal any anatomical or vascular abnormalities. The patient was managed with close follow-up and repeat endoscopy was not recommended due to his advanced age.