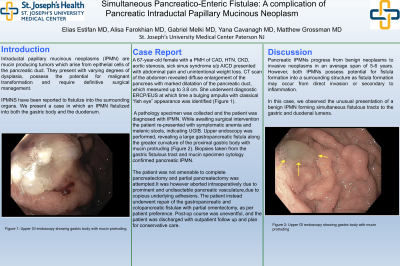 Introduction: Intraductal papillary mucinous neoplasms (IPMN) are mucin producing tumors which arise from epithelial cells of the pancreatic duct. They present with varying degrees of dysplasia, possess the potential for malignant transformation and require definitive surgical management. IPMNS have been reported to fistulize into the surrounding organs. We present a case in which an IPMN fistulized into both the gastric body and the duodenum.

Methods: A 67-year-old female with a PMH of CAD, HTN, CKD, aortic stenosis, sick sinus syndrome s/p AICD presented with abdominal pain and unintentional weight loss. CT scan of the abdomen revealed diffuse enlargement of the pancreas with marked dilatation of the pancreatic duct, which measured up to 3.8 cm. She underwent diagnostic ERCP/EUS at which time a bulging ampulla with classical “fish eye” appearance was identified (Figure 1). A pathology specimen was collected and the patient was diagnosed with IPMN. While awaiting surgical intervention the patient re-presented with symptomatic anemia and melenic stools, indicating UGIB. Upper endoscopy was performed, revealing a large gastropancreatic fistula along the greater curvature of the proximal gastric body with mucin protruding (Figure 2). Biopsies taken from the gastric fistulous tract and mucin specimen cytology confirmed pancreatic IPMN. The patient was not amenable to complete pancreatectomy and partial pancreatectomy was attempted.It was however aborted intraoperatively due to prominent and undisecteble pancreatic vasculature,due to copious underlying adhesions. The patient instead underwent repair of the gastropancreatic and colopancreatic fistulae with partial omentectomy, as per patient preference. Post-op course was uneventful, and the patient was discharged with outpatient follow up and plan for conservative care.

Discussion: Pancreatic IPMNs progress from benign neoplasms to invasive neoplasms in an average span of 5-6 years. However, both IPMNs possess potential for fistula formation into a surrounding structure as fistula formation may occur from direct invasion or secondary to inflammation.In this case, we observed the unusual presentation of a benign IPMN forming simultaneous fistulous tracts to the gastric and duodenal lumens. 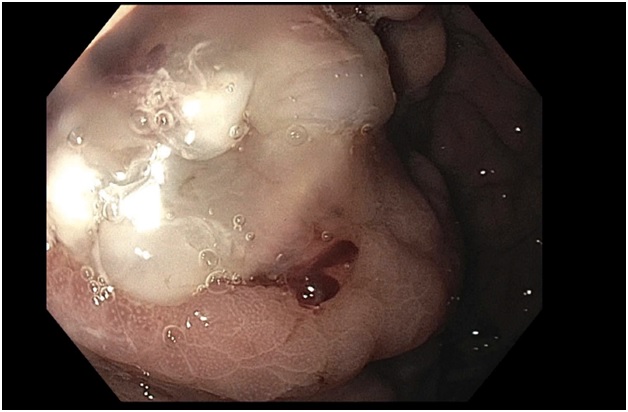 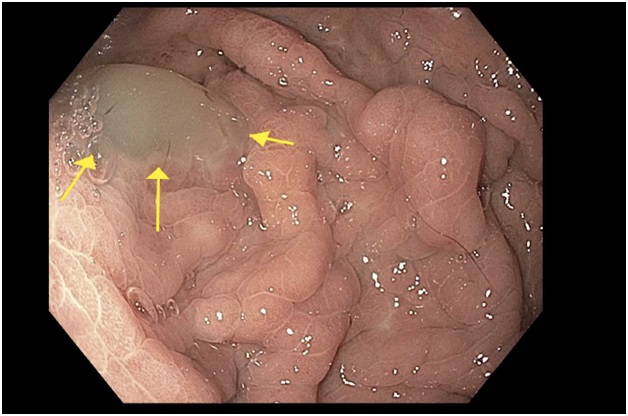