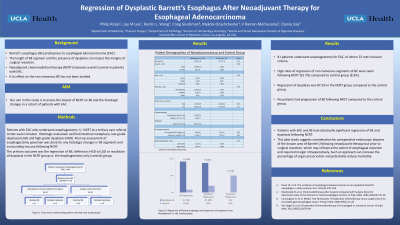 Introduction: Barrett’s esophagus (BE) predisposes to esophageal adenocarcinoma (EAC). The length of BE segment and the presence of dysplasia can impact the margins of surgical resection. While neoadjuvant chemoradiation therapy (NCRT) improves overall survival in patients with EAC, its effect on the non-tumorous BE has not been studied. We aimed to assess the impact of NCRT on BE and the histologic regression or progression in a cohort of patients with EAC

Methods: We reviewed patients with EAC who underwent esophagectomy with or without NCRT at a tertiary care referral center between January 2014 and January 2020. Patients with biopsy-proven BE were included. Histologic evaluation verified intestinal metaplasia, low-grade dysplasia (LGD) and high-grade dysplasia (HGD). Post-op assessment of esophagectomy specimen was done for any histologic changes in BE segments and surrounding mucosa. The primary outcome was the regression of BE; defined as HGD to LGD or resolution of dysplasia in the NCRT group vs. the esophagectomy only (control) group

Results:
Eighty-one patients with EAC underwent esophagectomy, of which 22 patients (17 male: mean age 71±7.6years) had biopsy-proven BE. Of these, 17 had long segment BE, 5 had short segment BE, and 13 patients had dysplasia (11 HGD, 2 LGD). Mean length of BE was 5.8±3.3 cm. Twelve patients underwent neoadjuvant chemoradiation, and 10 had esophagectomy alone. Eleven of the 12 patients who underwent NCRT had evidence of histologic regression of BE. The rate of regression of BE was significantly higher in the neoadjuvant group compared to the control group [11 patients (91.7%) vs. one patient (10%); respectively, P < 0.001]. A subgroup analysis showed regression of dysplasia in 7/8 patients in the neoadjuvant group, compared to 1/5 patients in the control group (87.5% vs. 20%, respectively, P=0.014). One patient was indefinite for dysplasia and none had a progression following NCRT


Discussion: This pilot study shows high rates of regression of non-tumorous segments of BE following NCRT. These findings suggest consideration for preoperative endoscopic biopsies of the known area of Barrett’s following neoadjuvant therapy but prior to surgical resection, which may influence the extent of esophageal resection and required margin intraoperatively. Such an approach can increase the percentage of organ preservation and potentially reduce morbidity. Future molecular studies on tissue specimens are needed to learn the mechanism of Barrett's response to chemoradiation therapy 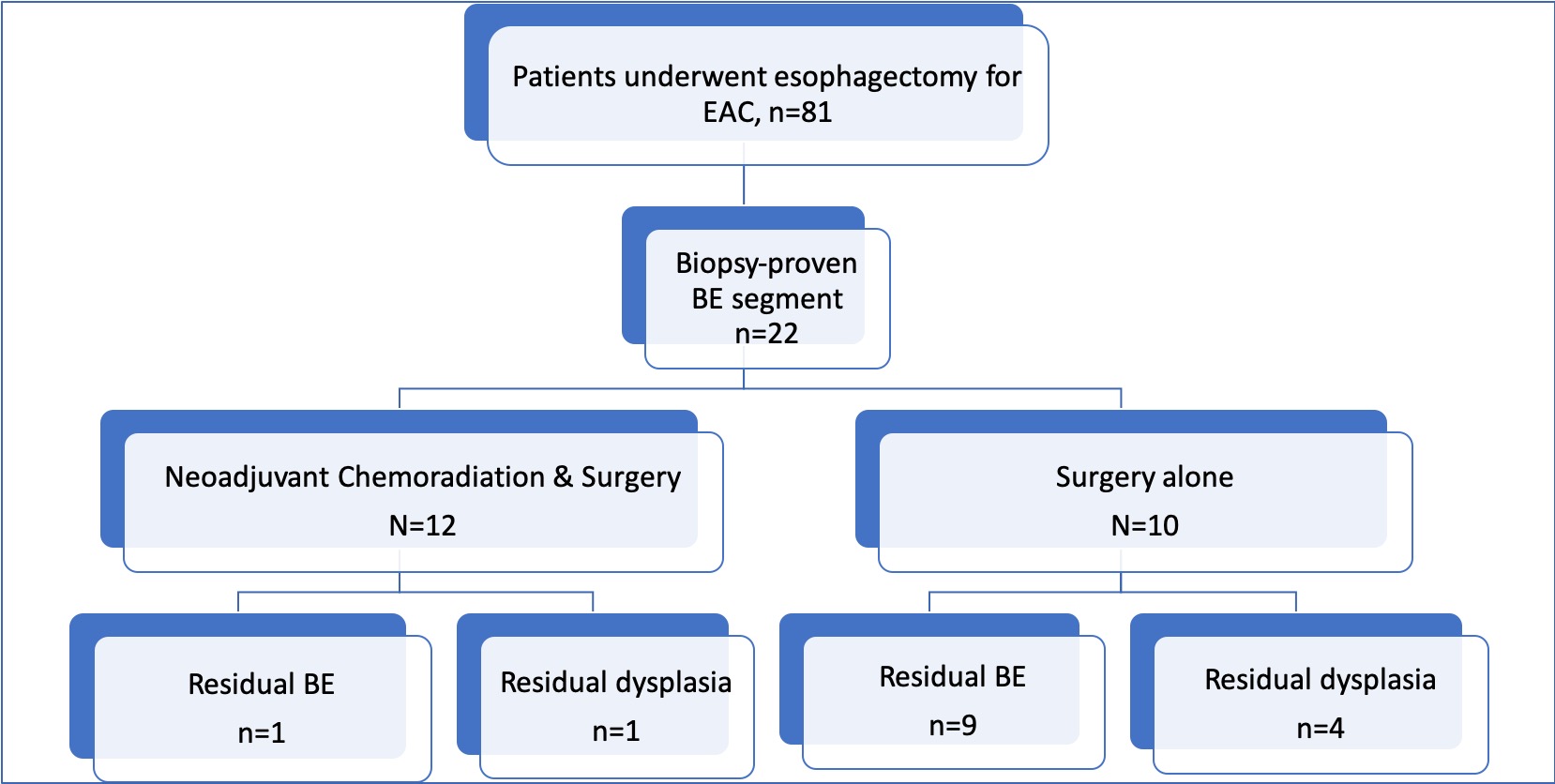 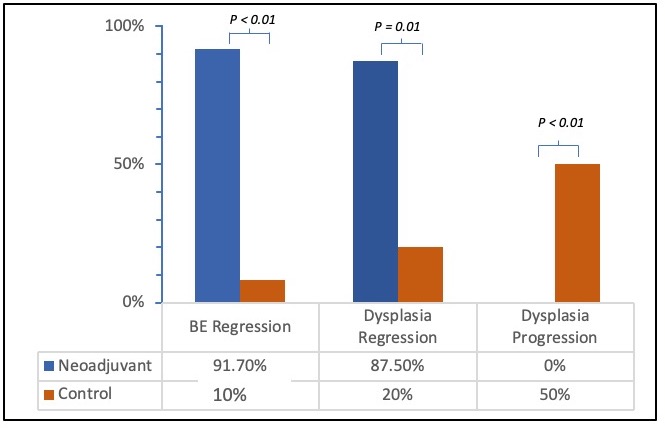 Figure 2. Regression of Barrett's esophagus and dysplasia in the Neoadjuvant vs. the Control group. BE, Barrett Esophagus. 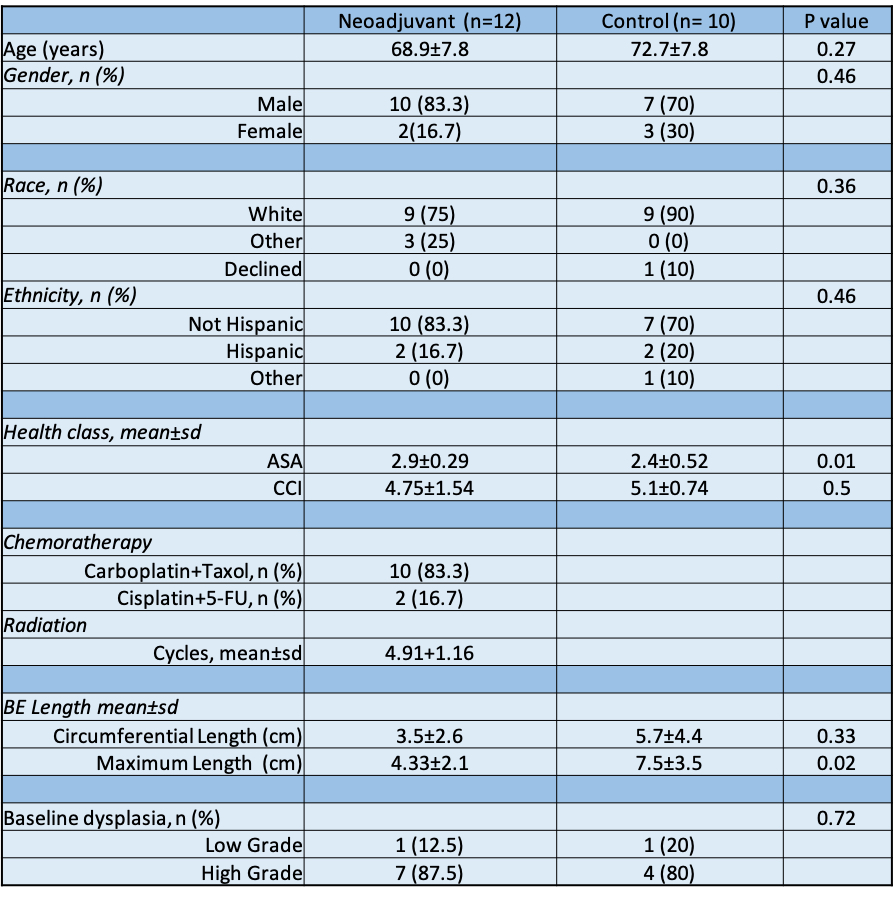