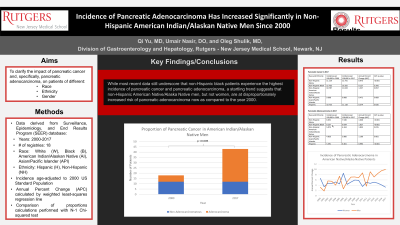 Introduction: Pancreatic cancer (PC) has been noted to be the second most common type of gastrointestinal cancer in the United States (US), and highest incidence has been noted in black patients. However, careful examination of how PC and, specifically, pancreatic adenocarcinoma (PAC) have affected patients of different races, ethnicity, and gender have not been examined recently.

Methods: All persons with PC and PAC recorded in the 18 Registries within the SEER database from 2000-2017 were characterized according to race (White, Black, American Indian/Alaska Native or AI, and Asian/Pacific Islander or API) and ethnicity (Hispanic, Non-Hispanic). Incidence was age-adjusted to the 2000 US Standard Population, and Annual Percent Change (APC) was calculated by fitting a weighted least-squares regression line to the natural logarithm of the rates using the calendar year as a regressor variable. Total numbers of patients were analyzed using comparison of proportions calculations.

Discussion: While most recent data still underscore that NHB experience the highest incidence of PC and PAC, a startling trend suggests that NHAI men, but not women, are at disproportionately increased risk of PAC now as compared to only 17 years prior.