P0998 (S1947). - Rhabdomyosarcoma: A Rare Esophageal Tumor With an Unusual Presentation of Fistulous Opening Into the Peri-Gastric Cavity 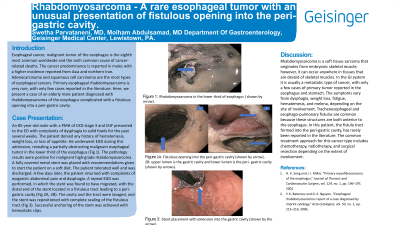 Introduction: Esophageal cancer, malignant tumor of the esophagus is the eighth most common worldwide and the sixth common cause of cancer-related deaths. The cancer predominance is reported in males with a higher incidence reported from Asia and northern Iran. Adenocarcinoma and squamous cell carcinoma are the most types of esophageal cancers. Primary esophageal rhabdomyosarcoma is very rare, with only few cases reported in the literature. Here, we present a case of an elderly male patient diagnosed with rhabdomyosarcoma of the esophagus complicated with a fistulous opening into a peri-gastric cavity.

Methods: An 85-year-old male with a PMH of CKD stage 3 and CHF presented to the ED with complaints of dysphagia to solid foods for the past several weeks. The patient denied any history of hematemesis, weight loss, or loss of appetite. He underwent EGD during this admission, revealing a partially obstructing malignant esophageal tumor in the lower third of the esophagus (Fig 1). The pathology results were positive for malignant high-grade rhabdomyosarcoma. A fully covered metal stent was placed with recommendations given to start the patient on a soft diet. The patient tolerated well and was discharged. A few days later, the patient returned with complaints of epigastric abdominal pain and dysphagia. A repeat EGD was performed, in which the stent was found to have migrated, with the distal end of the stent located in a fistulous tract leading to a peri-gastric cavity (Fig 2A, 2B). The cavity and the tract were lavaged, and the stent was repositioned with complete sealing of the fistulous tract (Fig 3). Successful anchoring of the stent was achieved with hemostatic clips.

Discussion: Rhabdomyosarcoma is a soft tissue sarcoma that originates from embryonic skeletal muscle; however, it can occur anywhere in tissues that are devoid of skeletal muscles. In the GI system it is usually a metastatic type of cancer, with only a few cases of primary tumor reported in the esophagus and stomach. The symptoms vary from dysphagia, weight loss, fatigue, hematemesis, and melena, depending on the site of involvement. Tracheoesophageal and esophago-pulmonary fistulas are common because these structures are both anterior to the esophagus. In this patient, the fistula tract formed into the peri-gastric cavity, has rarely been reported in the literature. The common treatment approach for this cancer type includes chemotherapy, radiotherapy, and surgical resection depending on the extent of involvement. 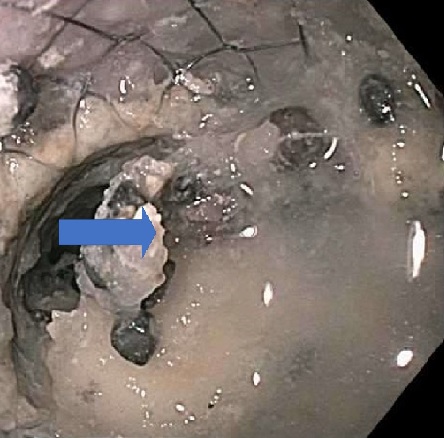 Figure 1:Rhabdomyosarcoma in the lower third of esophagus ( shown by arrow). 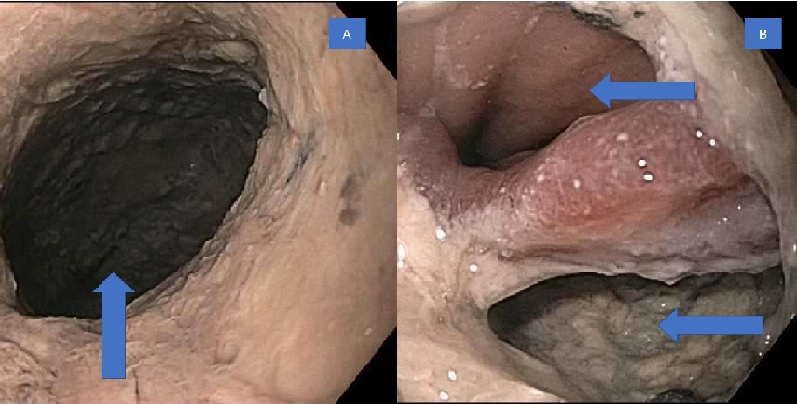 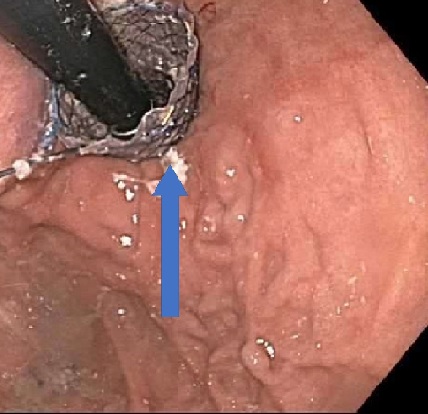 Figure 3:Stent placement with extension into the gastric cavity (shown by the arrow).