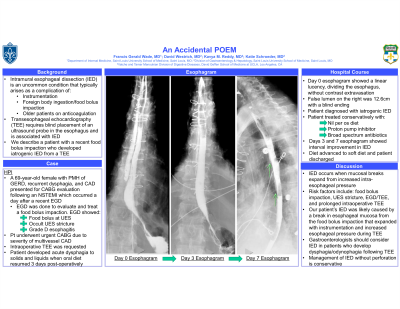 Introduction: Intramural esophageal dissection (IED) is an uncommon condition that typically arises as a complication of instrumentation, foreign body ingestion, or food bolus impaction. It also can occur spontaneously in older patients on anticoagulation. Transesophageal echocardiography (TEE) involves blind placement of an ultrasound probe in the esophagus and can be associated with esophageal dissection. We describe a patient who developed iatrogenic IED from TEE after a recent food bolus impaction.

Methods: A 69-year-old female with gastroesophageal reflux disease, recurrent dysphagia, and coronary artery disease (CAD) was transferred for coronary artery bypass graft (CABG) evaluation due to a non-ST segment elevation myocardial infarction. This occurred one day after an esophagogastroduodenoscopy (EGD) at an outside hospital for food bolus impaction. EGD was notable for the food bolus impacted at the upper esophageal sphincter (UES), concern for occult UES stricture, and grade D esophagitis.
The patient underwent urgent CABG along with intraoperative TEE due to the severity of multivessel CAD. Postoperatively she reported dysphagia to pills and some liquids, concerning for esophageal injury from TEE. Esophagram showed a linear lucency dividing the esophageal tract into 2 lumens without transmural contrast extravasation (Image 1). The lumen on the right was 12.6 centimeters with a blind ending. The patient was diagnosed with iatrogenic IED from TEE. She was treated conservatively with nil per os, proton pump inhibitor, and empiric piperacillin and tazobactam. Serial esophagography on days 3 and 7 from diagnosis showed improvement (Image 2) (Image 3). Her diet was advanced, and she was discharged on soft diet with outpatient follow up.

Discussion: IED occurs due to traumatic breaks in the mucosa that expand when intraesophageal pressure increases. Our patient’s risk factors for IED include recent food bolus impaction, possible UES stricture, recent endoscopic procedure, and prolonged intraoperative TEE. Our patient’s IED likely was provoked by a break in the mucosa from food bolus impaction exacerbated by instrumentation and increased intraesophageal pressure during TEE. Gastroenterologists should include IED as a differential diagnosis in patients with appropriate risk factors who have odynophagia and/or dysphagia following TEE. Management of IED without perforation is conservative. 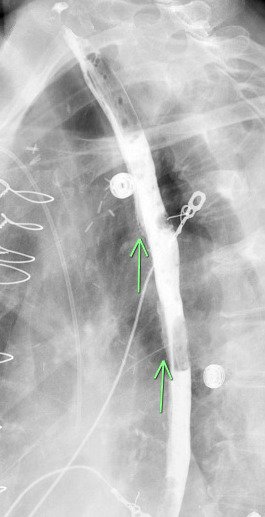