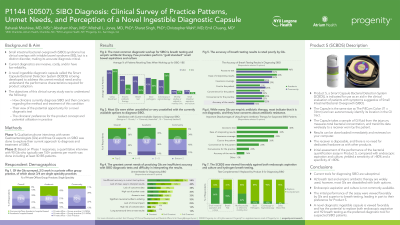 
Results: GIs saw 77 IBS and 22 SIBO patients on average per month. Suspected SIBO patients (36%) were formally diagnosed by BT with academic GIs placing a greater importance on a formal diagnosis rather than empiric antibiotic therapy. 10% of practices performed SBA for SIBO diagnosis. (Fig. 1) SIBO diagnosis was evaluated by BT in 47% of patients with only a fraction of GIs giving high ratings for BT accuracy. Empiric antibiotic therapy was performed in ~50% of suspected SIBO patients across both settings, but 91% were at least somewhat concerned with this practice and 60% were unsatisfied with all current diagnostic options. (Fig. 2)
Insufficient accuracy was the most frequently selected diagnostic unmet need, with 58% of GIs selecting it as one of the greatest unmet needs, followed by difficulty in interpreting results (48%). (Fig. 3) Over 70% of GIs indicated that SCBDS would be more accurate than BT and would recommend it to almost two-thirds of patients evaluated for SIBO and to one-third for IBS. Two-thirds of GIs also anticipated using SCBDS first over empiric antibiotic therapy alone. In addition, 59% of BT users and 66% performing SBA would replace these methods with SCBDS.


Discussion: GIs in both community and academic settings expressed a significant unmet need in SIBO diagnosis driven by BT performance limitations, and only a small minority of GIs were performing SBA to diagnose SIBO. A perceived strength of an FDA-approved SCBDS would be improved accuracy, interpretation and precision as compared to BT, with the majority of GIs suggesting they would replace conventional SIBO diagnostics with such a technology.

Fig 1: Patient workup for suspected of SIBO vs IBS.