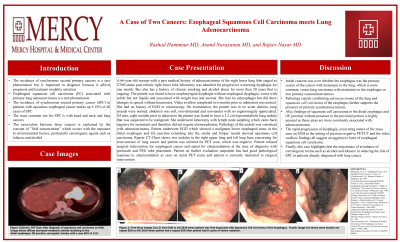 Introduction: Esophageal squamous cell carcinoma (EC) associated with a primary lung adenocarcinoma is a rare phenomenon. The incidence of synchronous second primary cancer (SPC) in patients with EC makes up 5-10% of cases. The association between these two cancers is explained by “field cancerization”, which occurs with exposure to carcinogenic agents such as tobacco and alcohol. The early detection of synchronous SPC is important for patients with EC because it affects prognosis and influences treatment modality selection.

Methods: A 66-year-old woman with history of right lower lobe lung adenocarcinoma s/p robotic lobectomy, smoking and alcohol abuse was admitted for progressively worsening dysphagia. She had oropharyngeal dysphagia that was worse with solids than liquids, significant weight loss, anemia and changes in speech. Video swallow completed two months prior to admission was normal. She never had an EGD or colonoscopy previously. She underwent EGD which showed a malignant lower esophageal mass in the distal esophagus and GE junction extending into the cardia and biopsy results showed squamous cell carcinoma. Eight months prior to admission the patient was found to have a 2.2 cm hypermetabolic lung nodule that was suspected to be malignant. She underwent lobectomy with lymph node sampling which was negative for metastasis and therefore did not require chemoradiation. Pathology revealed adenocarcinoma. Chest CT was repeated to evaluate for esophageal metastasis which showed two nodules in the right upper lung and left lung base concerning for reoccurrence of lung cancer however PET scan was negative. Patient refused surgical intervention for esophageal cancer and opted for chemoradiation

Discussion: Pathology reports confirming adenocarcinoma of the lung and squamous cell carcinoma of the esophagus supports the finding of synchronous primary tumors, a rare phenomenon. Also, the presence of squamous cell carcinoma in the distal esophagus and GE junction without presence in the proximal portion is highly unusual as these areas are more commonly associated with adenocarcinoma. This patient had an aggressive form of esophageal squamous cell carcinoma reflected by rapid progression of dysphagia and excavating nature of the mass seen on EGD in the setting of previous negative imaging reinforcing the need for timely diagnosis. Lastly, this case highlights the importance of avoidance of carcinogenic toxins such as alcohol and tobacco in reducing the risk of SPC in patients with lung cancer. 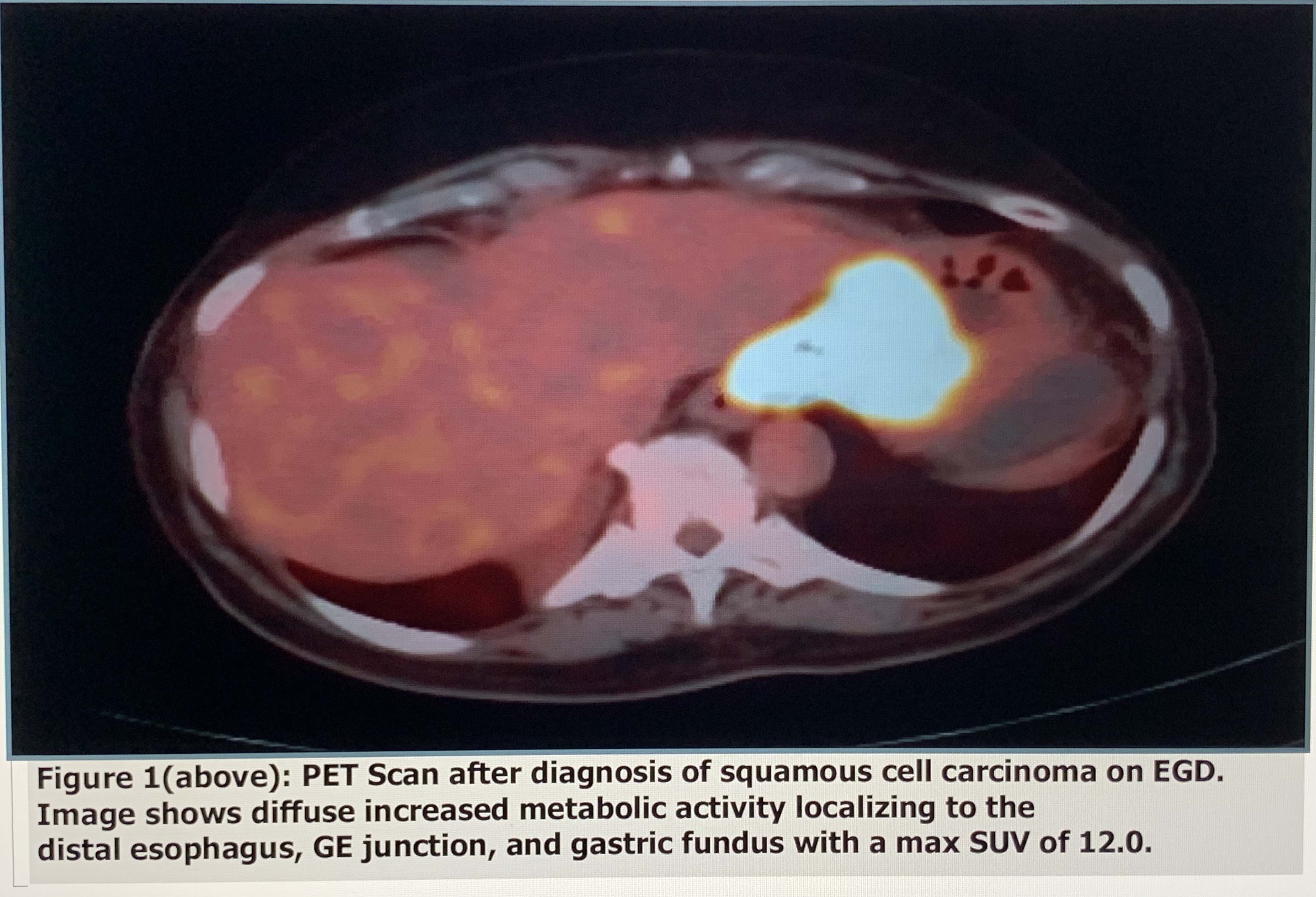