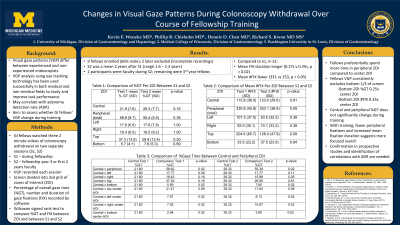 Introduction: Studies have shown Visual Gaze Patterns (VGP) differ between experienced and non-experienced endoscopists and may correlate with adenoma detection rate (ADR). It is unclear if VGP changes with training and experience.  Our aim was to assess whether GI fellows’ VGP change over the course of their training.

Methods: GI fellows at a single academic training program had VGP recorded while watching three 2 min videos of colonoscopy withdrawal on two separate sessions (S1, S2). S1 occurred during fellowship training. S2 occurred during the 3rd year of fellowship or within the first 2 years as faculty. The screen was divided into a 3x3 grid (1 center box, 8 periphery boxes segmented into top, bottom, left, right zones of interest (ZOI)). VGP recorded using a commercial eye tracker. Videos were shown on a 23” TFT-LCD monitor (1024x1280 pixels). Eye fixations (FIX) were determined by software algorithm. Percentage of overall gaze time (%GT) and the number and duration of FIX in each ZOI was recorded. %GT and FIX between ZOIs and between S1 and S2 were compared using the Wilcoxon signed-rank test.

Discussion: Fellows’ VGP appear to consistently exclude the bottom third of the screen. Through training, their central and peripheral %GT do not significantly change but they have fewer peripheral fixations and increased mean fixation duration suggesting a more focused search. Confirmation of these findings in prospective studies and identification of correlations with ADR are needed.

Table 2: Comparison of Mean Number of Fixations (#FIX) Per Zone of Interest (ZOI) Between Session 1 and Session 2

Table 3: Comparison of %Gaze Time Between Central and Peripheral ZOI