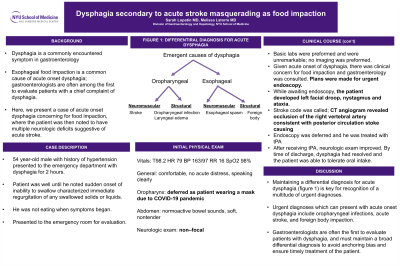 Introduction: Dysphagia is a commonly encountered symptom in gastroenterology, and esophageal food impaction is a common cause of acute onset dysphagia presenting in the emergency room. As such, gastroenterologists are often among the first to evaluate patients with a chief complaint of dysphagia. Here, we present a case of acute onset dysphagia concerning for food impaction, where the patient was then noted to have multiple neurologic deficits suggestive of acute stroke.

Methods: The patient is a 54 year-old male with history of hypertension who presented with acute onset dysphagia for two hours. His symptoms began with lightheadedness, and subsequently developed inability to  swallow liquids. His symptoms did not develop acutely after ingestion of any solid foods. He then noted discomfort in his neck, prompting presentation to the emergency department. On arrival, he was hemodynamically stable. Initial labs were unremarkable. Physical exam at time of arrival notable for normal cardiovascular and neurologic exams. Oropharyngeal exam was abbreviated as he was wearing a mask due to the COVID-19 pandemic. GI was consulted for concern for food impaction. While plans were being made for urgent endoscopy, he developed a left facial droop, nystagmus and gait ataxia concerning for acute posterior circulation stroke. He underwent CTA which was notable for occlusion of right vertebral and proximal basilar arteries. He promptly received tPA and was admitted to the stroke service. His neurologic exam improved over the course of his hospitalization and tolerated pureed diet by time of discharge, though with some residual dysphagia.

Discussion: The differential diagnosis for dysphagia is commonly differentiated into oropharyngeal and esophageal pathologies. Within each of these categories, there are both neuromuscular and structural processes which can manifest with symptoms of dysphagia. As gastroenterologists, we are frequently exposed to common esophageal pathologies. However, maintaining a broad differential and avoiding anchoring bias is key for timely recognition of a multitude of diagnoses. Urgent diagnoses which can present with acute onset dysphagia include oropharyngeal infections, acute stroke, and food and/or foreign body impaction. This case highlights the importance of the gastroenterologist, who may be the first person to evaluate a patient with acute onset dysphagia, in maintaining a broad and appropriate differential diagnosis to ensure appropriately and timely treatment of the patient.