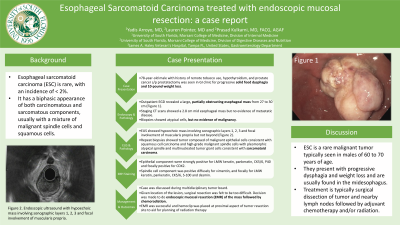 Introduction: Esophageal sarcomatoid carcinoma (ESC) is a rare malignancy with an incidence of less than 2%. The tumor has a biphasic appearance of both carcinomatous and sarcomatous components, usually with a mixture of malignant spindle cells and squamous cells.

Methods: The patient is a 78 year old man who was seen in clinic for progressive solid food dysphagia and 10 pound weight loss. He has a past medical history significant for remote tobacco use, hypothyroidism, and prostate cancer for which he underwent prostatectomy. He was scheduled for outpatient endoscopy which revealed a large, partially obstructing esophageal mass from 27 to 30 cm (Figure 1).  Staging CT scans showed a 2.8 cm mid esophageal mass but no evidence of metastatic disease.  Biopsies showed atypical cells, but no evidence of malignancy. He then underwent endoscopic ultrasound (EUS) which showed a hypoechoic mass involving sonographic layers 1, 2, 3 and focal involvement of muscularis propria but not beyond (Figure 2). Repeat biopsies showed tumor composed of malignant epithelial component consistent with squamous cell carcinoma and a high-grade malignant spindle cell component with pleomorphic atypical spindle and multinucleated tumor giant cells consistent with sarcomatoid carcinoma. Immunohistochemical stains of epithelial component were strongly positive for LMW keratin, pankeratin, CK5/6, P40 and focally positive for CDX2. The spindle cell component was positive diffusely for vimentin, and focally for LMW keratin, pankeratin, CK5/6, S-100 and desmin. His case was discussed during multidisciplinary tumor board. Given location of the lesion, surgical resection was felt to be too difficult. Decision was made to do endoscopic mucosal resection (EMR) of the mass followed by chemoradiation. EMR was successful and hemoclip was placed at proximal aspect of tumor resection site to aid for planning of radiation therapy (Figure 3).

Discussion: ESC is a rare malignant tumor typically seen in male patients at the age of 60 to 70 years. They present with progressive dysphagia and weight loss and are usually found in the midesophagus. Treatment is typically surgical dissection of tumor and nearby lymph nodes followed by adjuvant chemotherapy and/or radiation. Prognosis is good with 3 year survival of almost 60%. This case presents are rare esophageal malignancy that was managed endoscopically. With planned adjuvant treatment, this patient will likely have good outcomes given lack of metastasis.