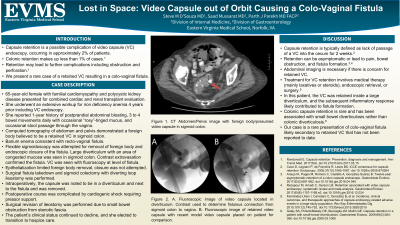 Introduction: Capsule retention is a possible complication of video capsule (VC) endoscopy, occurring in approximately 2% of patients, with colonic retention making up less than 1% of cases.1 Retention may lead to further complications including obstruction and perforation.1 We present a rare case of a retained VC resulting in a colo-vaginal fistula.

Methods: A 65 year old female with a past medical history of familial cardiomyopathy and polycystic kidney disease presented for evaluation for combined cardiac and renal transplant. She had an extensive workup for iron-deficiency anemia 4 years prior to admission, which included an upper endoscopy, colonoscopy, and a VC endoscopy. She additionally reported 1-year history of postprandial abdominal bloating, 3 to 4 bowel movements daily with occasional “rosey”-tinged mucus, and occasional stool passage through the vagina.
To further evaluate her symptoms, a computed tomography of abdomen and pelvis demonstrated a foreign body believed to be a retained VC.(Figure 1) Barium enema was consistent with recto-vaginal fistula. Flexible sigmoidoscopy was attempted for removal of foreign body and endoscopic closure of the fistula. During the procedure, a large diverticulum with an area of congested mucosa was seen in the sigmoid colon. Contrast injection demonstrated active extravasation identifying the fistula. (Figure 2) The VC was seen on fluoroscopy at the level of the fistula. Epithelialization limited foreign body removal, and closure was not attempted. General surgery was consulted, and she underwent surgical fistula takedown and sigmoid colectomy. Intraoperatively, the capsule was noted to be in a diverticulum and next to the fistula and was removed.

Discussion: Capsule retention is typically defined as lack of passage of a VC into the cecum for 2 weeks.2 Retention can be asymptomatic or lead to pain, bowel obstruction, and fistula formation.3,4 Abdominal imaging is necessary if there is concern for retained VC. Treatment for VC retention involves medical therapy (mainly laxatives or steroids), endoscopic retrieval, or surgery.5 In this patient, the VC was retained inside a large diverticulum, and the subsequent inflammatory response likely contributed to fistula formation. Colonic capsule retention is rare and has been associated with small bowel diverticulosis rather than colonic diverticulosis.6 Our case is a rare presentation of colo-vaginal fistula likely secondary to retained VC that has not been reported to date. 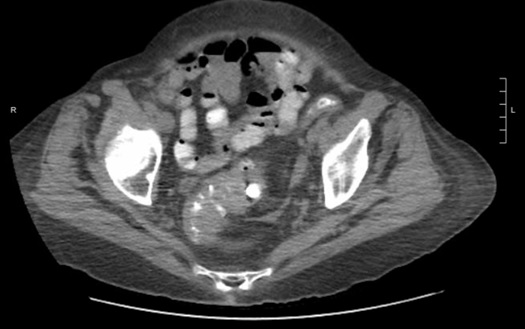 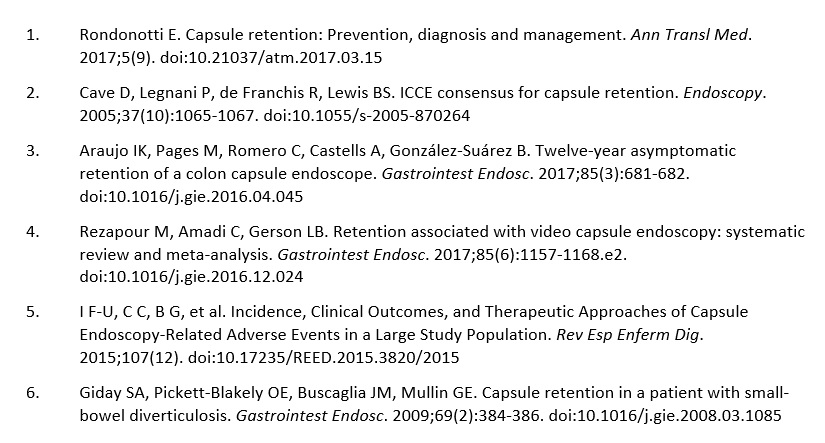