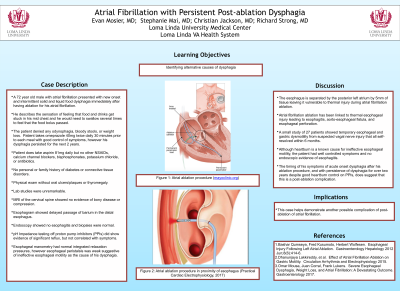 Introduction: The esophagus is separated by the posterior left atrium by 5mm of tissue leaving it vulnerable to thermal injury during atrial fibrillation ablation. This case discusses the possibility of thermal injury leading to dysphagia from ineffective esophageal motility.

Methods: A 72 year old male with atrial fibrillation presented with new onset and intermittent solid and liquid food dysphagia immediately after having ablation for his atrial fibrillation.  He describes the sensation of feeling that food and drinks get stuck in his mid chest and he would need to swallow several times to feel that the food bolus passed.  The patient denied any odynophagia, bloody stools, or weight loss.  Patient takes omeprazole 40mg twice daily 30 minutes prior to each meal with good control of symptoms, however his dysphagia persisted for the next 2 years.  Patient does take aspirin 81mg daily but no other NSAIDs, calcium channel blockers, bisphosphonates, potassium chloride, or antibiotics. No personal or family history of diabetes or connective tissue disorders.  Physical exam without oral ulcers/plaques or thyromegaly.  Lab studies were unremarkable.  MRI of the cervical spine showed no evidence of bony disease or compression.  Esophagram showed delayed passage of barium in the distal esophagus.  Endoscopy showed no esophagitis and biopsies were normal.  pH Impedance testing off proton pump inhibitors (PPIs) did show evidence of significant reflux, but not correlated with symptoms.  Esophageal manometry had normal integrated relaxation pressures, however esophageal peristalsis was weak suggestive of ineffective esophageal motility as the cause of his dysphagia.

Discussion: Atrial fibrillation ablation has been linked to thermal esophageal injury leading to esophagitis, aorto-esophageal fistula, and esophageal perforation.  A small study of 27 patients showed temporary esophageal and gastric dysmotility from suspected vagal nerve injury that all self-resolved within 6 months.  Although heartburn is a known cause for ineffective esophageal motility, the patient had well controlled symptoms and no endoscopic evidence of esophagitis.  The timing of his symptoms of acute onset dysphagia after his ablation procedure, and with persistence of dysphagia for over two years despite good heartburn control on PPIs, does suggest that this is a post-ablation complication.  This case helps demonstrate another possible complication of post-ablation of atrial fibrillation.