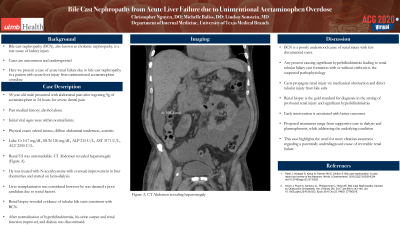 Introduction: Bile cast nephropathy (BCN) or cholemic nephropathy is a rare, underreported etiology of kidney injury thought to be secondary to proximal tubulopathy and intra-renal biliary cast formation in patients with severe liver disease. Early recognition of this potential cause of renal failure in patients with acute or chronic liver failure is essential, as early normalization of hyperbilirubinemia can lead to renal recovery.  Here we present a case of acute renal failure due to bile cast nephropathy in a patient with acute liver failure from unintentional acetaminophen overdose.

Methods: A 58-year-old male with a history of alcohol abuse presented with abdominal pain after ingesting 9 g of acetaminophen in 24 hours for severe dental pain. Vital signs were normal. Physical exam revealed scleral icterus, diffuse abdominal tenderness and asterixis. Labs were significant for Cr 10.7 mg/dL, BUN 120 mg/dL, AST 3171 U/L, ALT 2250 U/L, ALP 215 U/L, and bilirubin 46.5 mg/dL (conjugated 36.8/unconjugated). Renal US was unremarkable. Abdominal CT showed hepatomegaly (Figure A). He was treated with N-acetylcysteine with eventual improvement in liver chemistries and was started on hemodialysis. He was considered for liver transplant but was deemed to be a poor candidate due to social factors. Renal biopsy revealed evidence of tubular bile casts consistent with BCN. After normalization of hyperbilirubinemia, his urine output and renal function improved, and dialysis was discontinued.

Discussion: BCN is a poorly understood cause of renal injury with few documented cases. It is thought to arise from any process causing significant hyperbilirubinemia leading to renal tubular biliary cast formation with or without cirrhosis. These casts propagate renal injury via mechanical obstruction as well as direct tubular injury from bile salts. The gold standard for diagnosis, aside from high clinical suspicion, is by renal biopsy in the setting of profound renal injury and significant hyperbilirubinemia. Early intervention is associated with better outcomes and proposed treatments range from supportive care to dialysis and plasmapheresis while addressing the underlying condition. To our knowledge, this is the first reported case of BCN secondary to acetaminophen overdose. It highlights the need for more clinician awareness regarding a potentially underdiagnosed cause of reversible renal failure if addressed in time.