P0954 (S1903). - A Case of Barrett’s Esophagus With Low-Grade Dysplasia Progressing to Esophageal Adenocarcinoma Despite Radiofrequency Ablation and Vigilant Surveillance 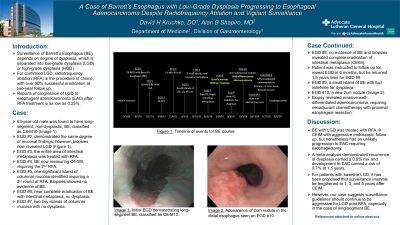 Introduction: Surveillance of Barrett’s Esophagus (BE) depends on degree of dysplasia, which is separated into low-grade dysplasia (LGD) or high-grade dysplasia (HGD). For patients with confirmed LGD, radiofrequency ablation (RFA), is the procedure of choice, with over 90% successful eradication at two year follow up. Reports of progression of LGD to esophageal adenocarcinoma (EAC) after RFA treatment is as low as 0.25%.

Methods: A 63-year-old man with a longstanding history of heartburn underwent an EGD that demonstrated long-segment BE, classified as C8-M10 (Image 1). Biopsies demonstrated non-dysplastic BE. Approximately 1.5 years later, EGD #2 demonstrated the same degree of mucosal findings; however, biopsies now revealed LGD (Figure 1, Timeline of EGDs). 8 months later, the patient was treated with RFA at the entire area of intestinal metaplasia. 2 months later, EGD #4 demonstrated BE now measuring C4-M9, again requiring RFA. The patient returned 6 months later, and EGD #5 demonstrated only 1 significant island of columnar mucosa, with biopsies showing no evidence of BE. 6 months later, repeat EGD #6 demonstrated near complete eradication of BE with only 3 sub-centimeter islands of columnar mucosa. Biopsies of these areas demonstrated intestinal metaplasia without dysplasia. EGD #7 performed 8 months later revealed 2 tiny islands of columnar mucosa with no dysplasia. EGD #8 was performed 1.5 years later with no evidence of BE and biopsies revealed complete eradication of intestinal metaplasia (CEIM). Patient was instructed to follow up for repeat EGD in 6 months, but he returned 1.5 years later and EGD #9 demonstrated a small island of BE with foci indefinite for dysplasia. A year later, EGD #10 demonstrated a new 2cm nodule (Image 2). Biopsy revealed invasive well-differentiated adenocarcinoma, requiring neoadjuvant chemotherapy with proximal esophageal resection.

Discussion: We present a case in which BE with LGD was treated with RFA with CEIM and aggressive endoscopic follow up, but nonetheless had an unlikely progression to EAC requiring esophagectomy. A meta-analysis demonstrated recurrence of dysplasia carried a 0.9% risk and development to EAC carried a risk of 0.7% at 1.5 years. For patients with baseline LGD, it has been proposed that surveillance intervals be lengthened to 1, 3, and 5 years after CEIM. However, our case suggests surveillance guidelines should continue to be aggressive for LGD post RFA, especially in the case of long-segment BE. 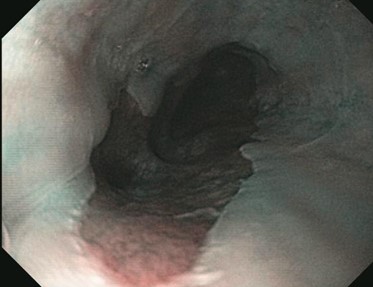 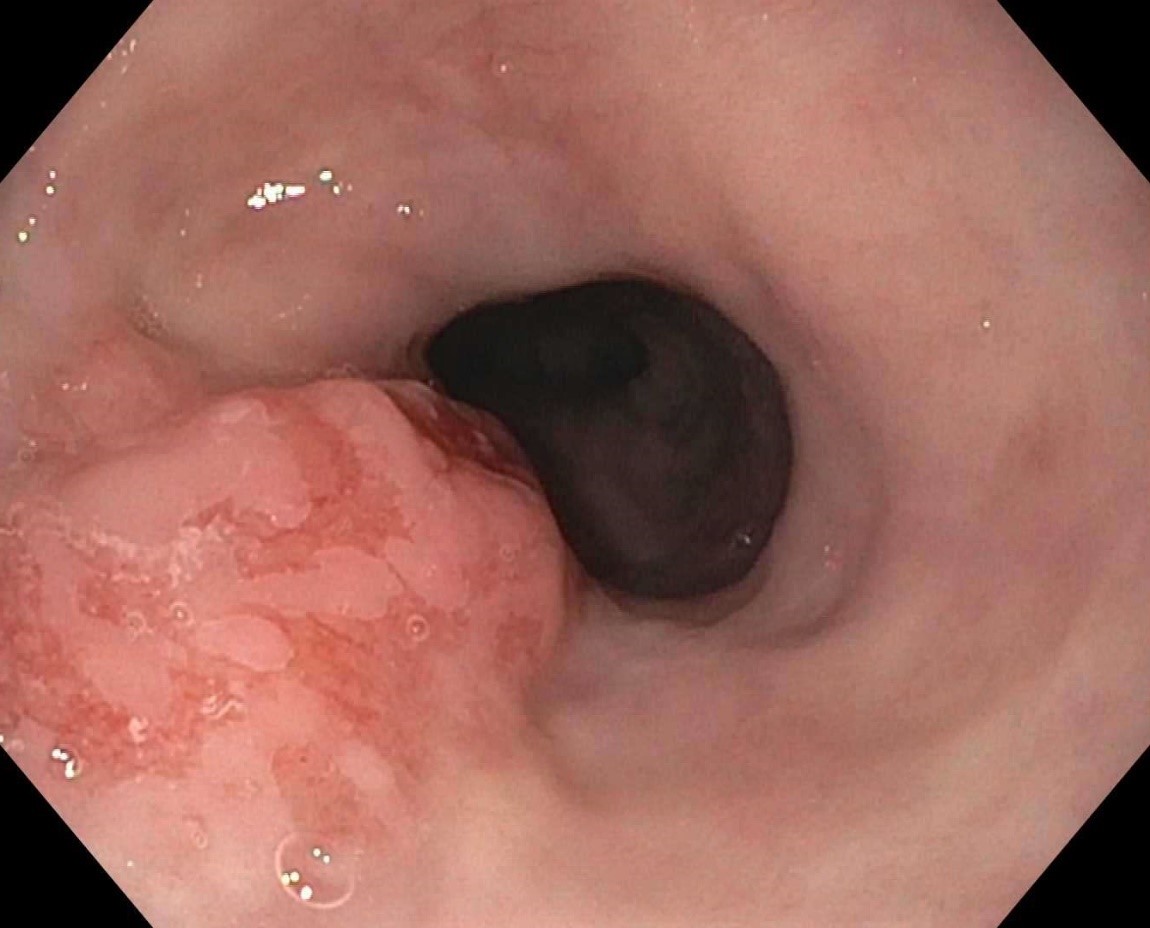 Timeline of events for BE course