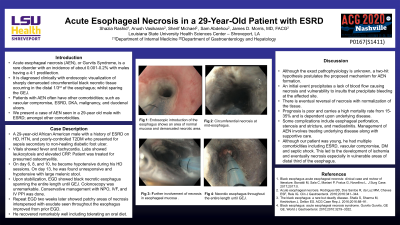 Introduction: Acute esophageal necrosis (AEN), or Gurvits Syndrome, is a rare disorder with an incidence of about 0.001-0.2% with males having a 4:1 predilection. It is diagnosed clinically with endoscopic visualization of sharply demarcated circumferential black necrotic tissue occurring in the distal 1/3rd of the esophagus; whilst sparing the GEJ. Patients with AEN often have other comorbidities; such as vascular compromise, ESRD, DKA, malignancy, and duodenal ulcers. In 90% of cases, initial presentation includes melena, coffee ground emesis or frank hematemesis. We present a case of AEN seen in a 29-year old male with ESRD; amongst other comorbidities.

Methods: Our patient is a 29-year-old African American male with a history of ESRD on HD, HTN, and poorly-controlled T2DM who presented for sepsis secondary to non-healing diabetic foot ulcer. Vitals were significant for T 100.9, P 100, BP 168/78. Labs were significant for wbc 31.49, Na 130, K 3.1, BUN 41, Cr 9.80, CRP 21. Patient was treated for presumed osteomyelitis.
During hospitalization, patient underwent HD three times per weekly schedule. On day 6, 8, and 10, he became hypotensive during his HD sessions. On day 13, he was found unresponsive and hypotensive with large melenic stool. Upon stabilization, EGD showed black necrotic esophagus spanning the entire length until GEJ. Colonoscopy was unremarkable. Conservative management with NPO, IVF, pRBC and IV PPI was done. Repeat EGD two weeks later showed patchy areas of necrosis interspersed with exudate seen throughout the esophagus improved from prior EGD. He recovered remarkably well including tolerating an oral diet.

Discussion: Although the exact pathophysiology is unknown, a two hit hypothesis postulates the proposed mechanism for AEN formation. An initial event precipitates a lack of blood flow causing necrosis and vulnerability to insults that precipitate bleeding at the affected site. There is eventual reversal of necrosis with normalization of the tissue. Prognosis is poor and carries a high mortality rate from 15-35% and is dependent upon underlying disease. Some complications include esophageal perforation, stenosis and stricture, and mediastinitis. Management of AEN involves treating underlying disease along with supportive care. Although our patient was young, he had multiple comorbidities including ESRD, vascular compromise, DM and septic shock. This led to the development of ischemia and eventually necrosis especially in vulnerable areas of distal third of the esophagus.