P0684 (S1806). - Ipilimumab and Nivolumab-Induced Colitis in a Patient With Recurrent Metastatic Melanoma 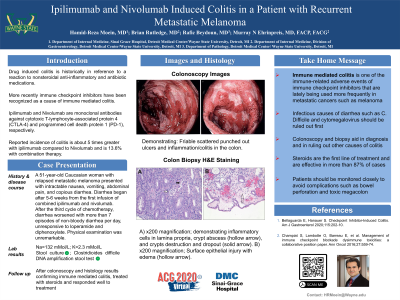 Introduction: Drug induced colitis is historically in reference to a reaction to nonsteroidal anti-inflammatory and antibiotic medications.  More recently immune checkpoint inhibitors have been recognized as a cause of immune mediated colitis. Ipilimumab and Nivolumab are monoclonal antibodies against cytotoxic T-lymphocyte-associated protein 4 (CTLA-4) and programmed cell death protein 1 (PD-1), respectively. They increase activity of T cells against cancerous cells but can simultaneously result in stimulation of T cells against non-cancerous tissues such as the GI tract. Reported incidence of colitis is about 5 times greater with ipilimumab compared to Nivolumab and is 13.6% with combination therapy.

Methods: A 51-year-old Caucasian woman with relapsed metastatic melanoma presented with intractable nausea, vomiting, abdominal pain, and copious diarrhea. Diarrhea began about 4 weeks prior to presentation following the second cycle of ipilimumab and nivolumab. After the third cycle, diarrhea worsened with more than 7 episodes of non-bloody diarrhea per day, unresponsive to loperamide and diphenoxylate. Physical exam was benign without abdominal tenderness. On admission, serum Na and K were 132 mMol/L and 2.3 mMol/L, respectively. The patient underwent aggressive fluid and electrolyte replacement. Stool culture and Clostridioides difficile DNA amplification stool test were negative. Colonoscopy revealed significant, severe colitis in transverse and descending colon.  Mild-moderate colitis in sigmoid colon with erythema, friable scattered punched out ulcers and proctitis were also observed. Multiple biopsies were taken which showed mild architectural abnormality with ulceration, crypt abscess, apoptotic bodies, and inflammatory cells in lamina propria. No granuloma or dysplasia were observed histologically. IV steroid was initiated and followed by oral steroid therapy; her symptoms subsequently improved. Steroids were tapered over the course of 8 weeks and she has not had any recurrence to date.

Discussion: Immune mediated colitis is one of the side effects of immune checkpoint inhibitors. Patients with worsening symptoms and negative infectious workup who do not respond to conservative treatment need to be admitted and evaluated promptly with colonoscopy. Once the diagnosis is reached, conservative treatment with steroid therapy should be started. Patients should be monitored closely to avoid complications such as bowel perforation and toxic megacolon. 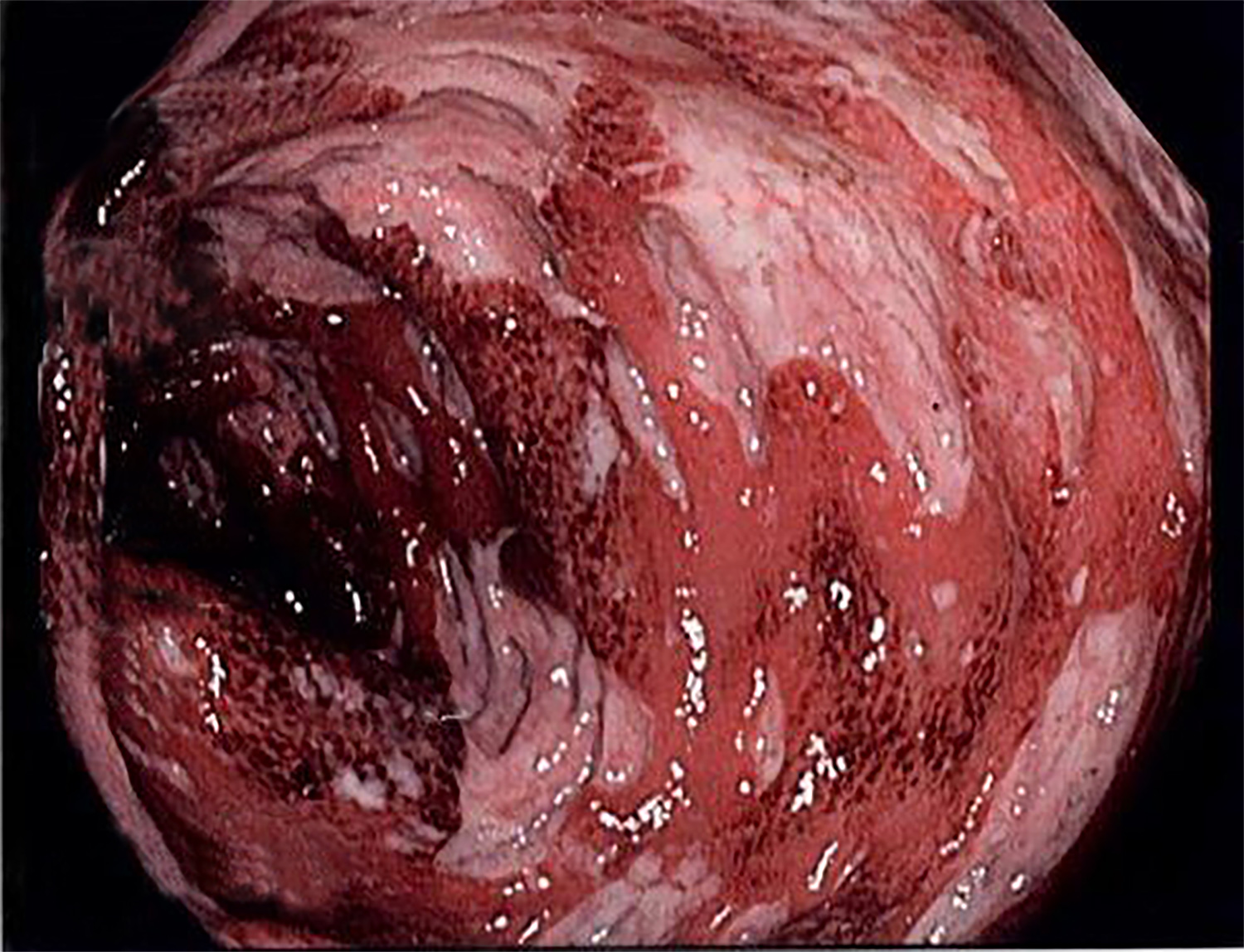 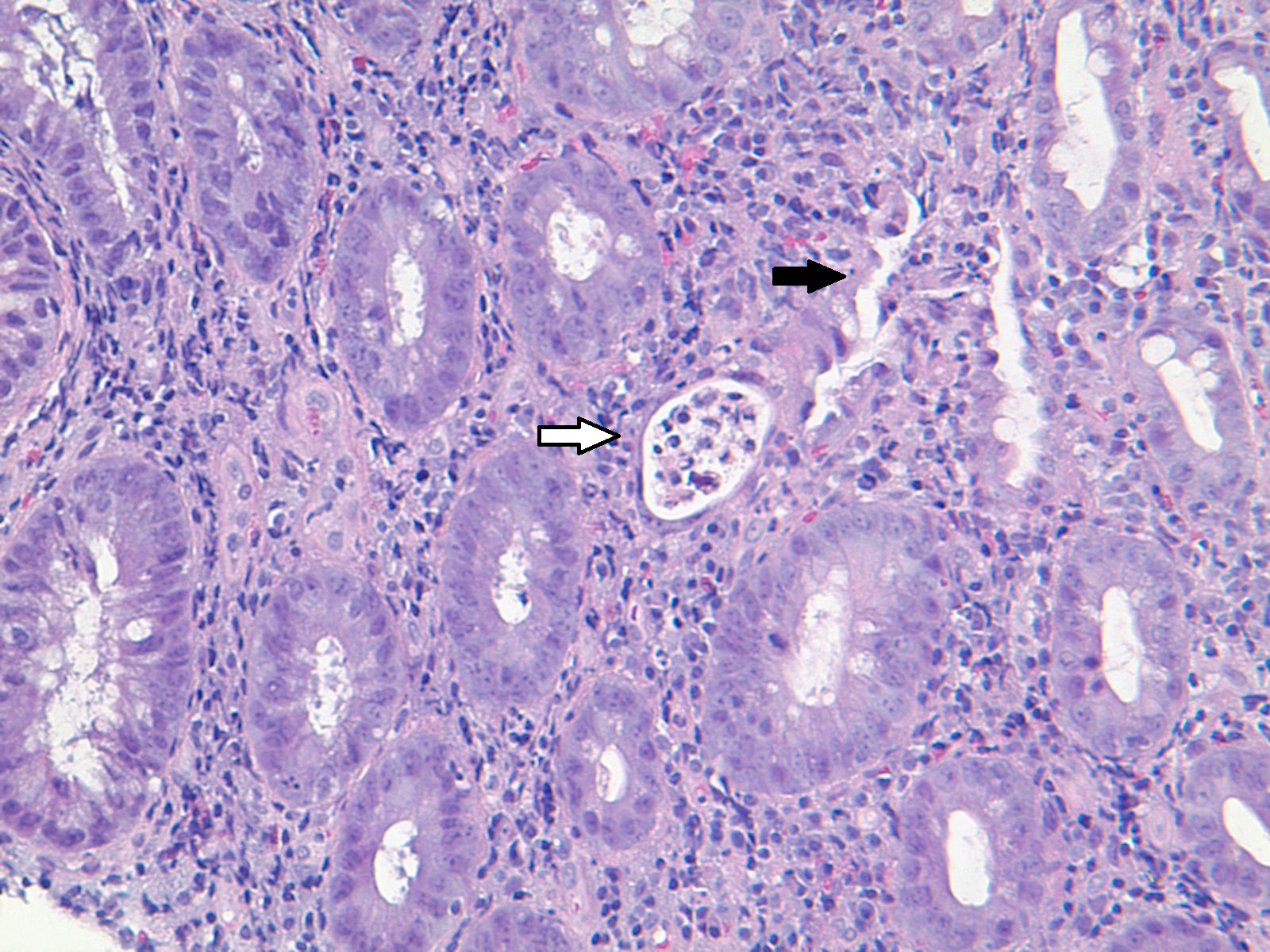