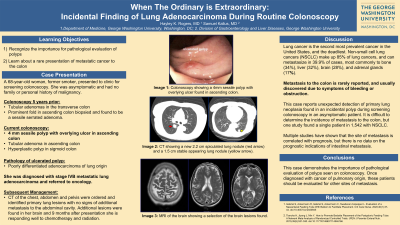 Introduction: Routine colonoscopy in asymptomatic individuals often reveals lesions of varying significance and are performed in an effort to detect colorectal cancer and remove precancerous polyps. About 70% of polyps are adenomas, which have malignant potential. For polyps less than 1 cm in size, there is less than a 1% chance of being cancerous. Even more rarely do these lesions result in diagnosis of a primary malignancy in a distant organ system.

Methods: A 68 year old woman, former smoker, presented to clinic for screening colonoscopy. She had no family or personal history of malignancy and was asymptomatic. Her prior colonoscopy in 2015 showed tubular adenomas in the transverse colon and a prominent fold in ascending colon that pathology revealed as sessile serrated adenoma. She returned for repeat colonoscopy in 2020 that was significant for tubular adenomas and a 4 mm sessile polyp with overlying ulcer in the ascending colon. This polyp resulted as poorly differentiated adenocarcinoma of lung origin. Immunostains demonstrate that the tumor cells are positive for CK7, Cam 5.2, TTF1, Napsin and patchy positive for CK20. This prompted CT which showed a new 2.2 cm spiculated lung nodule, a 1.5 cm stable appearing lung nodule, new mixed sclerotic and lytic lesions of the S1 vertebral body, prominent mediastinal and right hilar lymph nodes. She was diagnosed with metastatic lung adenocarcinoma and referred to oncology.

Discussion: Lung cancer is the second most commonly diagnosed cancer in the United States, and the deadliest. Non-small cell lung cancers(NSCLC) make up 85% of lung cancers, and have distant metastases in 39.9% of cases, most commonly to bone(34%), liver(32%), brain(28%), and adrenal glands(17%). Metastasis to the colon is rarely reported, and usually discovered due to symptoms of bleeding or obstruction. This case reports detection of primary lung neoplasia found in an incidental polyp during screening colonoscopy in an asymptomatic patient. It is difficult to determine the incidence of metastasis to the colon, but one study found a single patient in 1,542 with NSCLC. Multiple studies have shown that the site of metastasis is correlated with prognosis, but there is no data on the prognostic indications of intestinal metastasis. This case demonstrates the importance of pathological evaluation of polyps seen on colonoscopy. Once diagnosed with cancer of pulmonary origin, these patients should be evaluated for other sites of metastasis.