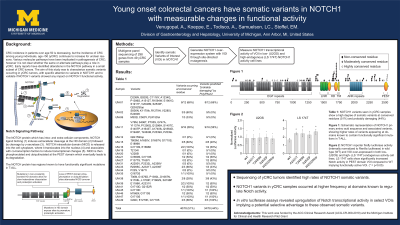 Introduction: CRC incidence in patients over age 50 is decreasing, but the incidence of CRC among young individuals, age < 50 (yCRC) continues to increase for unclear reasons. Various molecular pathways have been implicated in pathogenesis of CRC; however it is not clear whether the same or alternate pathways play a role in yCRC. Early reports have identified alterations in the NOTCH pathway in a small subset of CRC tumors. The aim of this study was to characterize somatic variants occurring in yCRC tumors, with specific attention to variants in NOTCH1.


Methods: DNA was extracted from 49 CRC tumors from patients under age 50 and was subjected to Next Generation Sequencing (NGS) with a multigene panel of 298 genes. Variants were filtered for non-silent exon variants. In vitro assays were performed using transient transfection and luciferase activity.

Results: Somatic variants in NOTCH1 were identified in 27 of 49 yCRC tumors, and were more frequent than previously reported in the TCGA cohort of CRCs diagnosed at age >50 (55% vs 4%). The variants tended to occur predominantly at areas involved in the regulation of NOTCH1 signaling activity, specifically the heterodimerization domain (HD, 22%) and PEST domains (19%). In silico analysis was performed for variants occurring at highly conserved residues, predicted to be highly damaging by Polyphen2 or occurring in multiple patient samples. This revealed eight variants likely to generate functional activity. Four of these variants of interest (A2331T, T2483M, S2530FW, 2532Stop) were successfully introduced into in vitro expression systems and assayed for luciferase activity using a NOTCH1 transcriptional reporter construct. A significant increase in three of the four variants (all but S2530W) was observed compared to wild type NOTCH1 in the colorectal cancer cell line LS174T (a cell line with endogenous NOTCH activity).

Discussion: Sequencing of yCRC tumors identified differences in the frequency of somatic variants in the NOTCH1 gene compared to older counterparts. Interrogation of these NOTCH1 variants using functional assays revealed upregulation of NOTCH1 transcriptional activity implying a potential selective advantage to these observed somatic variants. These data suggest that some yCRCs may dysregulate NOTCH1 signaling as an alternative molecular pathway in a manner not previously observed in their older counterparts which could have implications for cancer treatment and prevention.