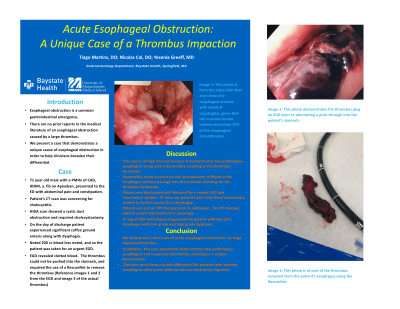 Methods: A 71-year-old male with coronary artery disease, atrial fibrillation on apixaban, and insulin-dependent diabetes presented to the emergency department with right upper quadrant pain. He was found to have acute cholecystitis and given his comorbidities he was successfully treated with percutaneous cholecystostomy tube placement. On the day of planned discharge the patient began to experience sudden onset dysphagia with coffee-ground emesis. His dysphagia progressed in a matter of hours to the point that he was spitting up his secretions, raising suspicion for an esophageal obstruction.
A few hours later he developed frank hematemesis associated with tachycardia which prompted an emergent upper endoscopy. Exam showed a large distal esophageal thrombus obliterating the lumen. No active bleeding was noted. The gastroscope was used to apply forward gentle pressure to the right aspect of the thrombus. This intervention was unsuccessful. Next, using a 3 x 5.5-cm RescueNet™ retrieval net the large thrombus was grasped and successfully extracted. The thrombus measured 9 x 2-cm. Inspection of the underlying esophageal mucosa revealed Grade D erosive esophagitis. His severe esophagitis was treated with omeprazole 40 mg twice daily for 8 weeks. The patient was able to tolerate oral intake following this endoscopic intervention and he was discharged home the following day, after admitting to his providers a long history of intermittent dysphagia to solids. Repeat upper endoscopy to check for esophageal healing and outpatient high resolution esophageal manometry are planned for further work up of an underlying motility disorder pending lifting of pandemic-related scheduling restrictions.

Discussion: We believe this is first case of acute esophageal obstruction by large impacted thrombus. In addition, this case potentially demonstrates two pathologies, esophagitis and suspected dysmotility, resulting in a unique presentation. Clinicians must keep a broad differential for patients who develop esophageal obstruction without discrete food bolus ingestion. 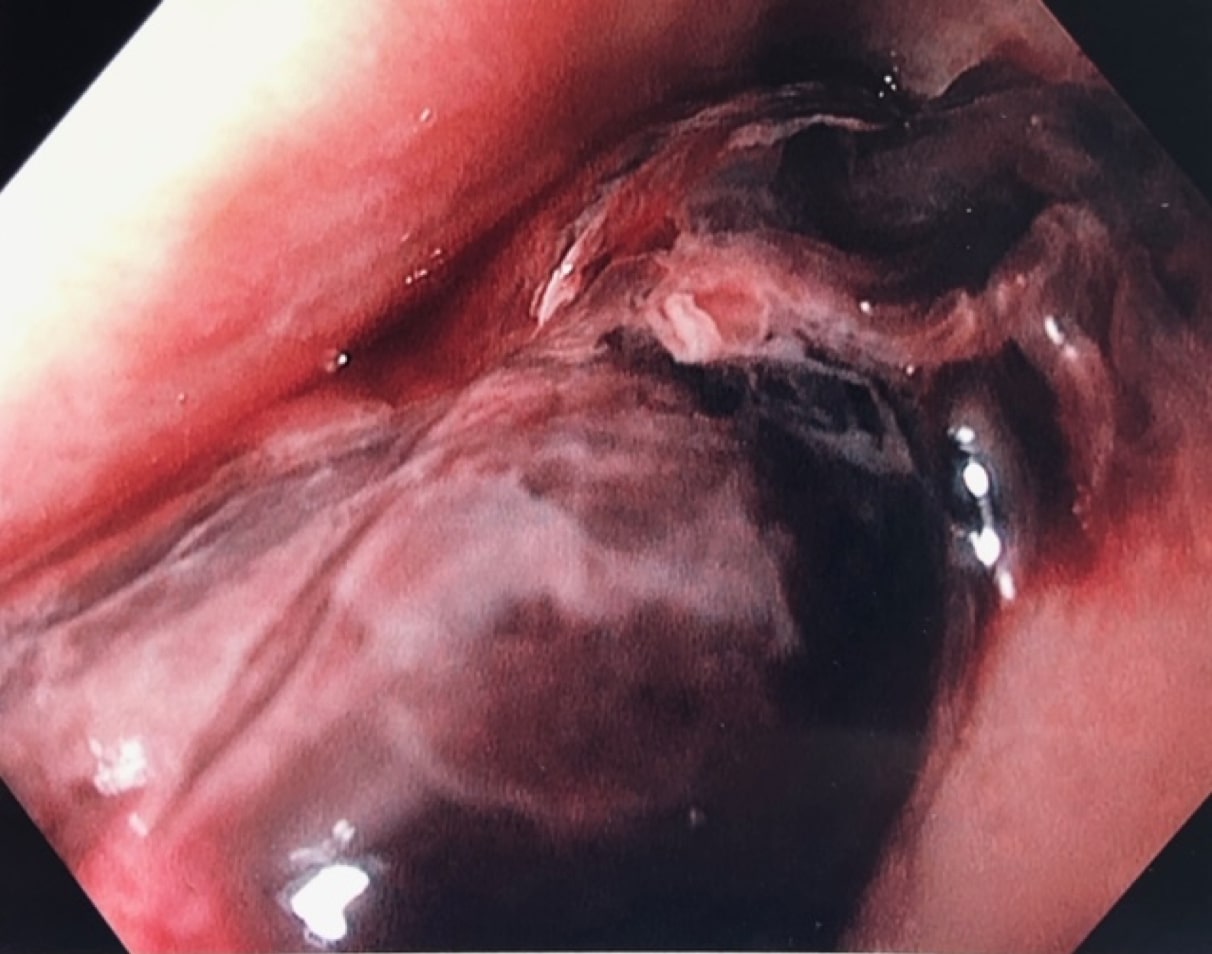 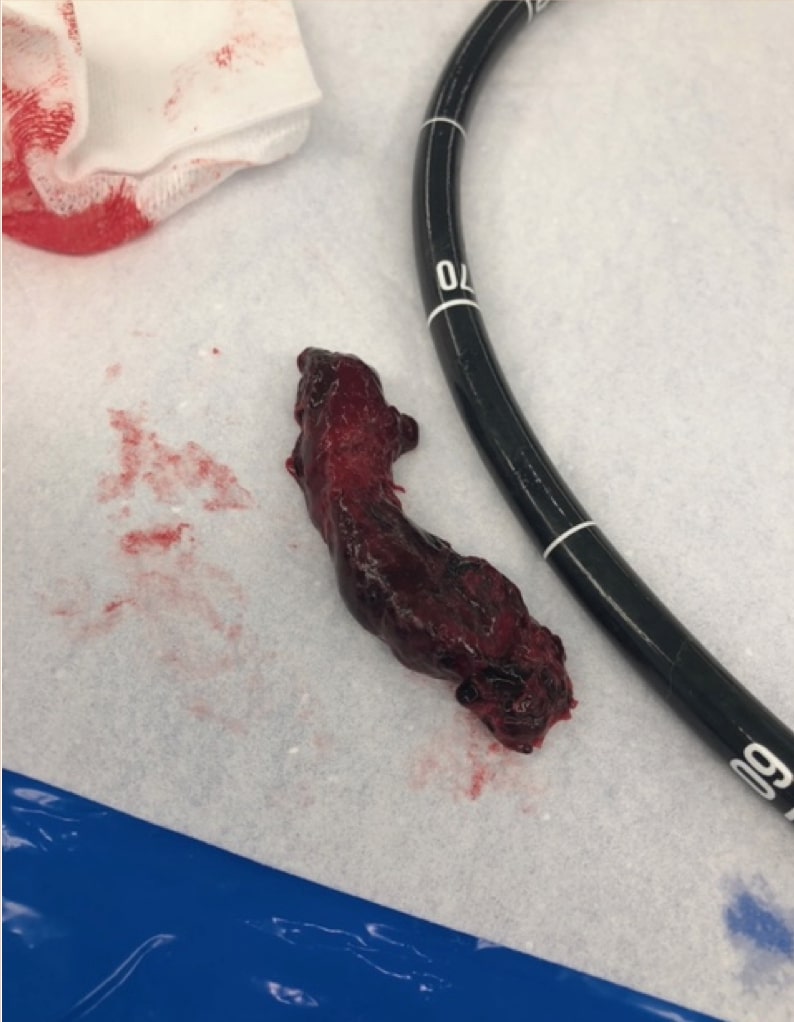 Image 2: Portion of the thrombus removed. 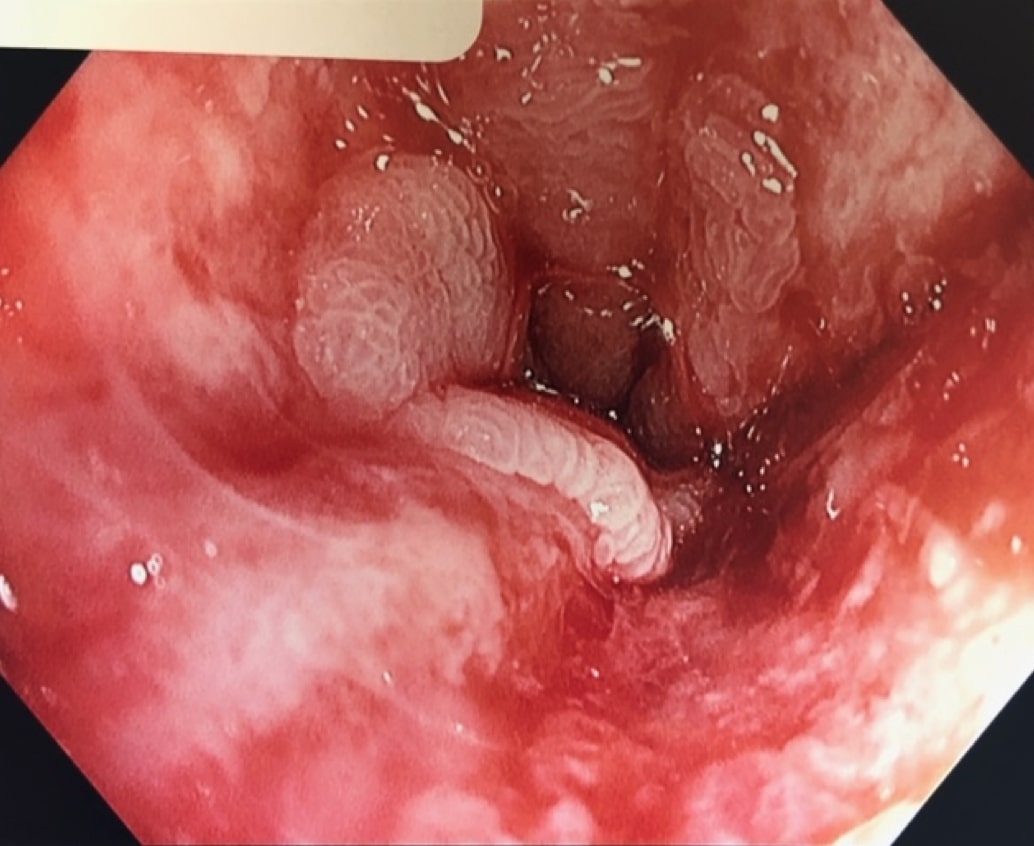