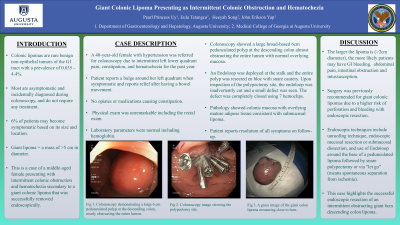 Introduction: Colonic lipomas are rare benign non-epithelial tumors of the gastrointestinal (GI) tract with a prevalence of 0.035 -4.4%. Most colonic lipomas are asymptomatic and incidentally diagnosed during the colonoscopy. However, 6% of patients may become symptomatic based on its size and location. A giant lipoma is defined as a mass of >5 cm in diameter.  This is a case of a female presenting with intermittent colonic obstruction and hematochezia secondary to a giant colonic lipoma that was successfully removed endoscopically.

Methods: A 40-year-old female was seen due to intermittent left lower quadrant pain, constipation, and hematochezia for the past year. She described a bulge around her left quadrant during symptoms, all of which were relieved after having a bowel movement. She was not on medications known to cause constipation. Physical exam was unremarkable including the rectal exam. Colonoscopy showed a large broad-based 6 cm pedunculated polyp at the descending colon, nearly obstructing the entire lumen, with normal overlying mucosa and some erosions at the tip. The polyp exhibited a pillow sign. An endoloop was deployed at the stalk and the entire polyp was resected en bloc with snare cautery. Inspection of polypectomy site showed that the endoloop was inadvertently cut with a small perforation that was completely closed using 7 endoclips. She was asymptomatic post-procedure and was discharged with 7-days of antibiotics. Pathology revealed colonic mucosa with overlying mature adipose tissue consistent with submucosal lipoma. Patient reports resolution of all her symptoms on follow-up.

Discussion: Asymptomatic colon lipomas do not require any treatment. The larger the lipoma is (typically >2 cm in diameter), the more likely that patients may manifest with symptoms related to GI bleeding, abdominal pain, intestinal obstruction, and intussusception.  Historically, surgical resection has been recommended for management due to a higher risk of perforation and bleeding with endoscopic resection. However, more advanced endoscopic techniques have been effectively used in the management of giant colonic lipomas. These include unroofing technique, endoscopic mucosal resection or submucosal dissection, and use of endoloop around the base of a pedunculated lipoma followed by snare polypectomy or via “let go” technique, allowing for spontaneous separation from ischemia. This case highlights the successful endoscopic resection of an intermittent obstructing 6 cm giant descending colon lipoma. 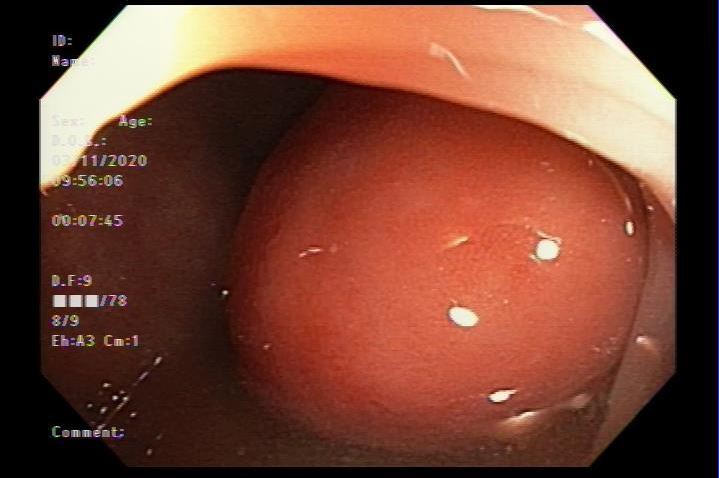 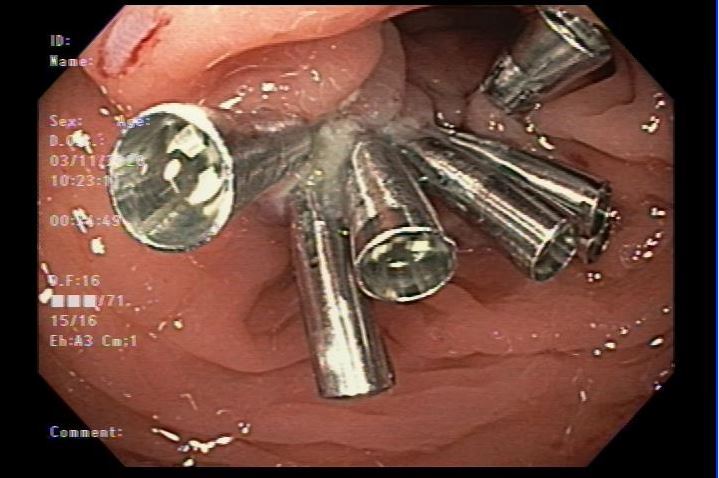 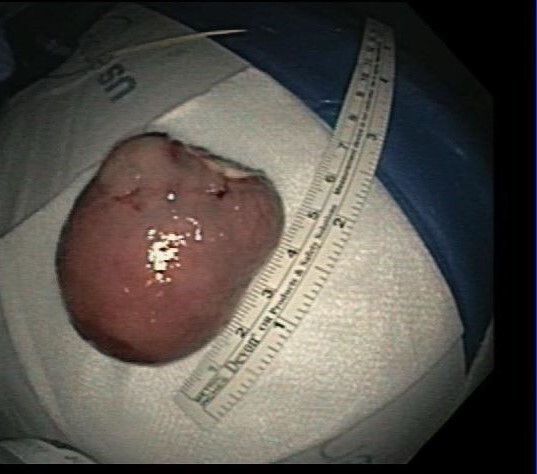 A gross image of the giant colon lipoma measuring close to 6cm.