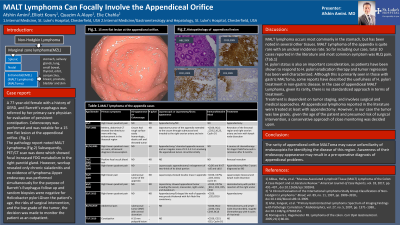 A 77-year-old female with a history of chronic gastroesophageal reflux disease, complicated by non-dysplastic Barrett’s esophagus was referred by her primary care physician for evaluation of persistent constipation. On physical examination, the abdomen was soft without tenderness or rebound. Lab tests were unremarkable. Colonoscopy was performed and was notable for a 15 mm flat lesion at the appendiceal orifice that was biopsied since it was not amenable for endoscopic resection [Figure.1]. The histology was suggestive of MALT Lymphoma [Figure.2]. Upper endoscopy was performed simultaneously for the purpose of Barrett’s Esophagus surveillance, and the Helicobacter pylori test by histology was negative. Her blood work at that time was unremarkable, with the exception of an elevated LDH to 724U/L.

Subsequently, the PET/CT scan was performed, which did not reveal any other focal increased FDG metabolism.

Given the patient’s age, the risks of surgical intervention, and the low-grade nature of the tumor, the decision was made to survey the patient closely, especially since she was not interested in the surgical option. The patient was followed after 1 year with a repeat PET/CT that did not show evidence of disease progression.

Discussion: MALT Lymphoma of the appendix is quite rare with an unclear incidence rate. There is no standardized approach in terms of management and treatment.H. pylori status is an important consideration, as patients have been shown to respond to H. pylori eradication therapy with significant tumor regression. Although this is primarily seen in those with gastric MALToma, some reports have described the usefulness of H. pylori treatment in non-gastric disease. Our patient was followed after 1 year with repeat PET/CT without evidence of disease progression. We think that it is reasonable to closely monitor those patients given the slow-growing nature of these tumors. Awareness of the endoscopy appearance of appendiceal orifice MALT Lymphoma may result in pre-operative diagnosis of this entity.

Figure 2.A. Immunohistochemical stains demonstrate that most of the lymphocytes are CD20-positive B-cells .B. With far fewer CD3-positive T-cells.