P0932 (S1881). - Progression of Nondysplastic Barrett's Esophagus to Advanced Adenocarcinoma of the Esophagus in a Patient With Recently Treated Breast Cancer 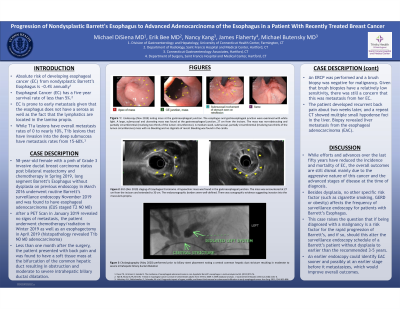 Introduction: Esophageal Cancer (EC) has an overall five-year survival rate of less than 5%. EC is prone to early metastasis given that the esophagus does not have a serosa as well as the fact that the lymphatics are in the lamina propia. Thus, while T1a lesions have overall metastasis rates of 0 to nearly 10%, T1b lesions that have invasion into the deep submucosa have metastasis rates from 15-60%.

Methods: We present a case of a 58-year-old female with a history of Grade 3 invasive ductal breast carcinoma status post bilateral mastectomy and chemotherapy in Spring 2019, long segment Barrett’s Esophagus without dysplasia on previous endoscopy in March 2016 that progressed to esophageal adenocarcinoma (EUS staged T2 N0 M0) in November 2019 (found on routine Barrett’s surveillance endoscopy). After a PET Scan in January 2019 revealed no signs of metastasis, the patient underwent chemotherapy/radiation in Winter 2019 as well as an esophagectomy in April 2019 (histopathology revealed T1b N0 M0 adenocarcinoma.). Less than one month after the surgery, the patient presented with back pain and was found to have a soft tissue mass at the bifurcation of the common hepatic duct resulting in obstruction and moderate to severe intrahepatic biliary ductal dilatation. An ERCP was performed and a brush biopsy was negative for malignancy. Given that brush biopsies have a relatively low sensitivity, there was still a concern that this was metastasis from her EC. The patient developed recurrent back pain about two weeks later, and a repeat CT showed multiple small hypodense foci in the liver. Biopsy revealed liver metastasis from the esophageal adenocarcinoma (EAC).

Discussion: While efforts and advances over the last fifty years have reduced the incidence and mortality of EC, the overall outcomes are still dismal mainly due to the aggressive nature of this cancer and the advanced stages of disease at the time of diagnosis. Besides dysplasia, no other specific risk factor (such as cigarette smoking, GERD or obesity) affects the frequency of surveillance endoscopy for patients with Barrett’s Esophagus. This case raises the question if being diagnosed with a malignancy is a risk factor for the rapid progression of Barrett’s, and if so, should this alter the surveillance endoscopy schedule of a Barrett’s patient without dysplasia to earlier than the recommended 3-5 years. An earlier endoscopy could identify EAC sooner and possibly at an earlier stage before it metastasizes, which would improve overall outcomes. EUS (Dec 2019) staging of Esophageal Carcinoma. A hypoechoic mass was found in the gastroesophageal junction. The mass was encountered at 27 cm from the incisors and extended to 30 cm. The endosonographic borders were well-defined. There was sonographic evidence suggesting invasion into the muscularis propria.