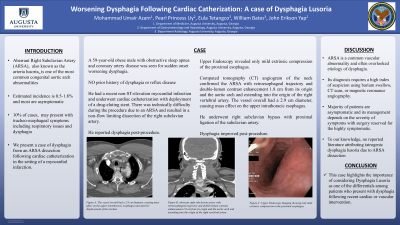 Introduction: Aberrant Right Subclavian Artery (ARSA), also known as the arteria lusoria, is one of the most common congenital aortic arch abnormalities which can cause dysphagia via extrinsic compression of the esophagus. Its estimated incidence is 0.5-1.8% and most are asymptomatic. However, in 10% of cases, they may present with tracheo-esophageal symptoms including respiratory issues and dysphagia. We present a case of dysphagia from an ARSA dissection following cardiac catheterization in the setting of a myocardial infarction.

Methods: A 59-year-old obese male with obstructive sleep apnea and coronary artery disease was seen for sudden onset worsening dysphagia. He denied any prior history of dysphagia or reflux disease. He had a recent non-ST-elevation myocardial infarction and underwent cardiac catheterization with deployment of a drug-eluting stent. There was technically difficulty during the procedure due to an ARSA and resulted in a non-flow limiting dissection of the right subclavian artery. He reported dysphagia post-procedure.  A computed tomography (CT) angiogram of the neck confirmed the ARSA with retroesophageal trajectory and double-lumen contrast enhancement 1.8 cm from its origin and the aortic arch and extending into the origin of the right vertebral artery. The vessel overall had a 2.9 cm diameter, causing mass effect on the upper intrathoracic esophagus. An upper endoscopy showed mild extrinsic compression in the proximal esophagus with otherwise normal esophageal mucosa. He then underwent right carotid-subclavian bypass with proximal ligation of the right subclavian artery which resolved the dysphagia.

Discussion: ARSA is a common vascular abnormality and yet an often overlooked etiology of dysphagia. Its diagnosis requires a high index of suspicion using barium swallow, CT scan, or magnetic resonance angiography. Majority of patients are asymptomatic and its management depends on the severity of symptoms with surgery reserved for the highly symptomatic. Review of literature only showed one case of dysphagia post-cardiac catheterization reported by Tsao et al. that is due to an aortic perforation. To our knowledge, no reported literature attributing iatrogenic dysphagia lusoria due to ARSA dissection. This case highlights the importance of considering dysphagia lusoria as one of the differentials among patients with dysphagia with recent cardiac or vascular intervention. 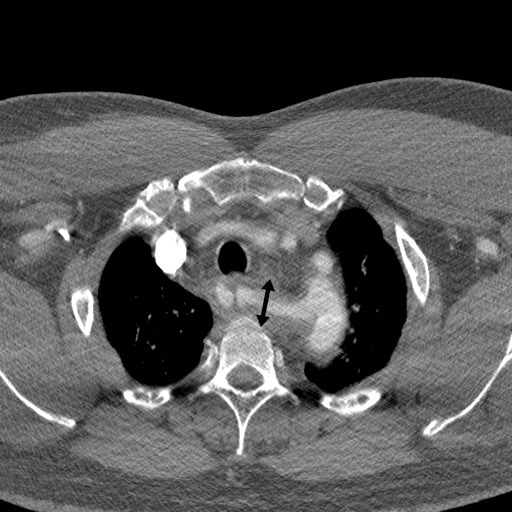 CT angiogram of the neck confirmed the aberrant right subclavian artery with retroesophageal trajectory and double-lumen contrast enhancement 1.8 cm from its origin and the aortic arch and extending into the origin of the right vertebral artery. 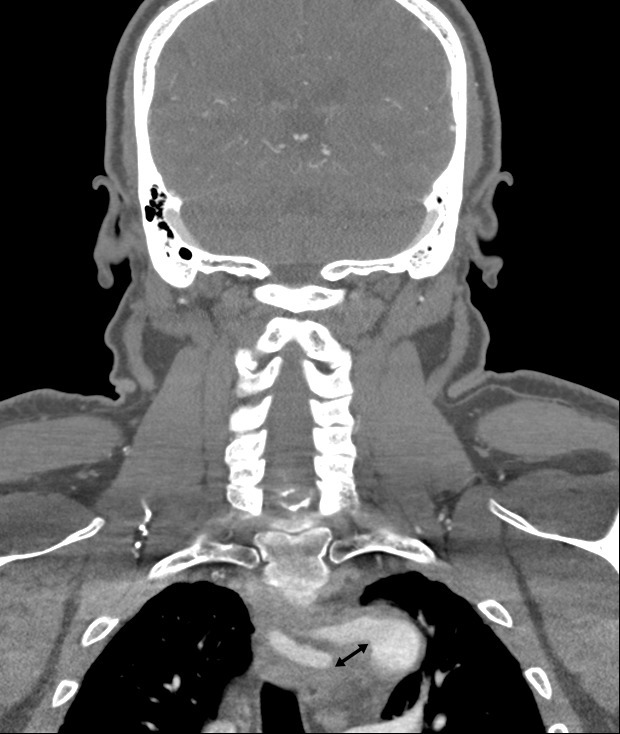 The vessel overall had a 2.9 cm diameter, causing mass effect on the upper intrathoracic esophagus and anterior displacement of the trachea. 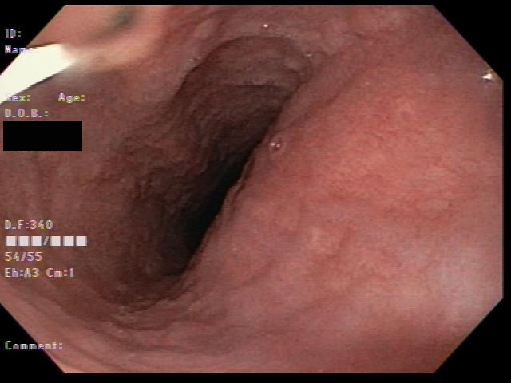