P0958 (S1907). - Cardiomegaly-Induced Dysphagia: An Uncommon Cause of Aspiration 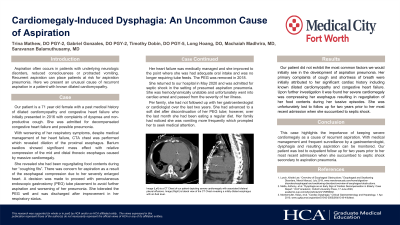 Trina L. Mathew, DO, Gabriel Gonzales, DO, Timothy Dobin, DO, Long Hoang, DO; Medical City Fort Worth, Fort Worth, TX

Introduction: Aspiration often occurs in patients with underlying neurologic disorders, reduced consciousness or protracted vomiting. Recurrent aspiration can place patients at risk for aspiration pneumonia. Here we present an unusual cause of recurrent aspiration in a patient with known dilated cardiomyopathy.

Methods: Patient is a 71 year old female with a past medical history of dilated cardiomyopathy and congestive heart failure who initially presented in 2016 with complaints of dyspnea and non-productive cough. She was admitted for decompensated congestive heart failure and possible pneumonia.
With worsening of her respiratory symptoms, despite medical management of her heart failure, CTA chest was performed which revealed dilation of the proximal esophagus. Barium swallow showed significant mass effect with relative compression of the mid and distal thoracic esophagus caused by massive cardiomegaly.

She revealed she had been regurgitating food contents during her “coughing fits”. There was concern for aspiration as a result of the esophageal compression due to her severely enlarged heart. A decision was made to proceed with percutaneous endoscopic gastrostomy (PEG) tube placement to avoid further aspiration and worsening of her pneumonia. She tolerated the PEG well and was discharged after improvement in her respiratory status.

Her heart failure was medically managed and she improved to the point where she was had adequate oral intake and was no longer requiring tube feeds. The PEG was removed in 2018.
She returned to our hospital in May 2020 and was admitted for septic shock in the setting of presumed aspiration pneumonia. She was hemodynamically unstable and unfortunately went into cardiac arrest and passed from the severity of her illness.
Per family, she had not followed up with her gastroenterologist or cardiologist over the last two years. She had advanced to a soft diet after discontinuation of her PEG tube; however, over the last month she had been eating a regular diet. Her family had noticed she was vomiting more frequently which prompted her to seek medical attention.

Discussion: This case highlights the importance of keeping severe cardiomegaly as a cause of recurrent aspiration. With medical management and frequent surveillance by a gastroenterologist, dysphagia and resulting aspiration can be monitored. Our patient was lost to outpatient follow up for two years prior to her most recent admission when she succumbed to septic shock secondary to aspiration pneumonia.