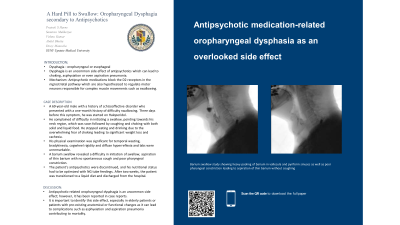 Introduction: Dysphagia can be anatomically categorized as either oropharyngeal or esophageal based on where and when the patient endorses difficulty swallowing and oropharyngeal dysphagia secondary to antipsychotic medications is often overlooked. Antipsychotics, especially the first generation, have been classically associated with extrapyramidal symptoms such as dystonia, akathisia, tremors and tardive dyskinesia. Dysphagia is an uncommon side effect of antipsychotics which can lead to choking, asphyxiation, or even aspiration pneumonia. Antipsychotic medications block the D2 receptors in the nigrostriatal pathway which are also hypothesized to regulate motor neurons responsible for complex muscle movements such as swallowing. Here, we present a case of severe dysphagia leading to failure to thrive in an adult after initiation of a first-generation antipsychotic.

Methods: A 69-year-old male with a history of schizoaffective disorder who presented with a one-month history of difficulty swallowing. Three days before this symptom, he was started on Haloperidol for his schizoaffective disorder. He complained of difficulty in initiating a swallow, pointing towards his neck region, which was soon followed by coughing and choking with both solid and liquid food. He stopped eating and drinking due to the overwhelming fear of choking leading to significant weight loss and cachexia. His physical examination was significant for temporal wasting, bradykinesia, cogwheel rigidity and diffuse hyperreflexia. Labs were unremarkable. A barium swallow revealed a difficulty in initiation of swallow, aspiration of thin barium with no spontaneous cough and poor pharyngeal constriction. CT soft tissue/neck revealed no evidence of extrinsic compression and MRI brain was done to rule out a stroke. An upper endoscopy was not performed as the barium swallow provided sufficient information to clinch the diagnosis. The patient’s antipsychotics were discontinued, and his nutritional status had to be optimized with NG tube feedings. After two weeks, the patient was transitioned to a liquid diet and discharged from the hospital.

Discussion: Antipsychotic-related oropharyngeal dysphagia is an uncommon side effect; however, it has been reported in case reports. It is important to identify this side effect, especially in elderly patients or patients with pre-existing anatomical or functional changes as it can lead to complications such as asphyxiation and aspiration pneumonia contributing to mortality.