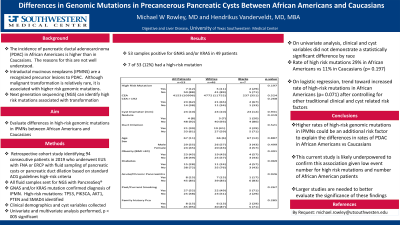 Introduction: Intraductal papillary mucinous neoplasms (IPMNs) are one of the recognized precursors of pancreatic ductal adenocarcinoma (PDAC). Detection of precancerous and early stage neoplastic lesions is critical given the poor 5-year survival rates of PDAC.  Although malignant transformation occurs in the minority of lesions, those that do transform are more likely to have high-risk genomic mutations.  Next generation sequencing (NGS) identifies IPMNs with these high-risk mutations.
African Americans have a higher incidence of PDAC than Caucasians. Multiple factors have been identified that partly explain this difference.  However, genomic variability in IMPNs between races has not been studied.

Discussion: Higher rates of high-risk genomic mutations in IPMNs might be a factor in explaining the higher rates of PDAC in African Americans.  Larger studies are needed to evaluate these findings.