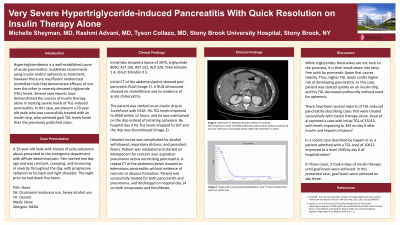 Introduction: Hypertriglyceridemia is a well-established cause of acute pancreatitis. Guidelines recommend using insulin and/or apheresis as treatment, however there are insufficient randomized controlled trials that demonstrate efficacy of one over the other in severely elevated triglyceride (TGL) levels. Several case reports have demonstrated the success of insulin therapy alone in treating severe levels of TGL-induced pancreatitis. In this case, we present a 29-year old male who was successfully treated with an insulin drip, who achieved goal TGL levels faster than the previously published cases.

Methods: A 29-year-old male with history of alcohol and poly-substance abuse presented to the emergency department with diffuse abdominal pain. Initial labs showed a lipase of 3970, triglyceride 8050, ALT 150, AST 152, ALP 229, Total bilirubin 1.4, direct bilirubin 0.5. A CT of the abdomen/pelvis showed peri-pancreatic fluid (image 1). A RUQ ultrasound showed no cholelithiasis and no evidence of acute cholecystitis.  Patient was started on an insulin drip at 1unit/hour with D5LR. His TGL levels improved to 6050 within 12 hours, and he was maintained on the drip instead of transitioning to apheresis. By hospital day 3 his TGL levels dropped to 507 and the drip was discontinued (image 2).

Hospital course was complicated by alcohol withdrawal, respiratory distress, and persistent fevers. Patient was intubated and started on Meropenem for concern over aspiration pneumonia versus necrotizing pancreatitis. A repeat CT of the abdomen/pelvis showed an edematous pancreatitis without evidence of necrosis or abscess formation. Patient was successfully treated for both pancreatitis and pneumonia, and discharged on hospital day 14 on omeprazole and fenofibrate.

Discussion: While TGL themselves are not toxic to the pancreas, it is their break-down into fatty-free acids by pancreatic lipase that causes toxicity. Thus, higher TGL levels confer higher risk of developing pancreatitis. In this case, patient was started quickly on an insulin drip, and his TGL decreased profoundly without need for apheresis. There have been several case reports of TGL-induced pancreatitis that were treated successfully with insulin therapy alone. However, in those cases, it took 6 days of insulin therapy until goal levels were achieved. In this presented case, goal levels were achieved by day 3. 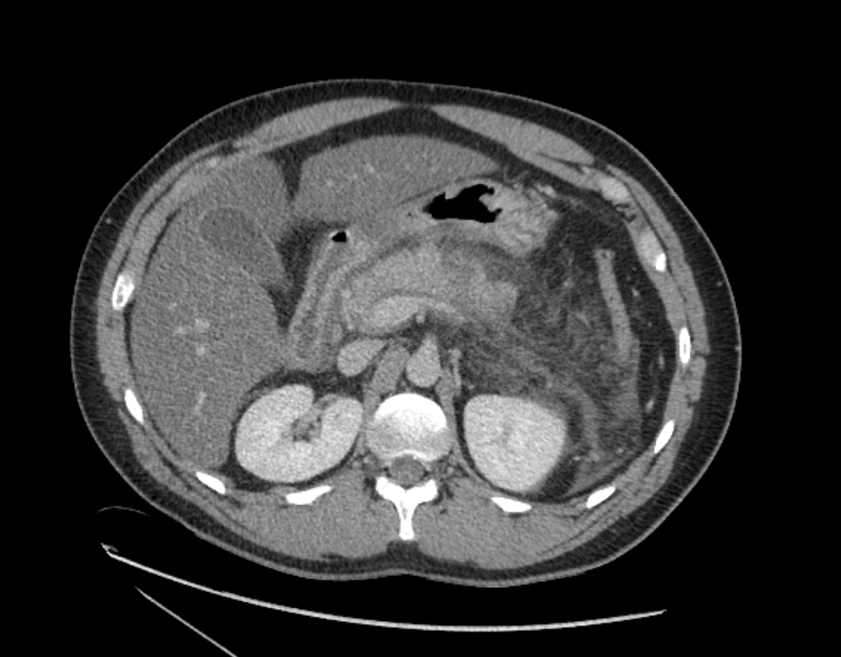 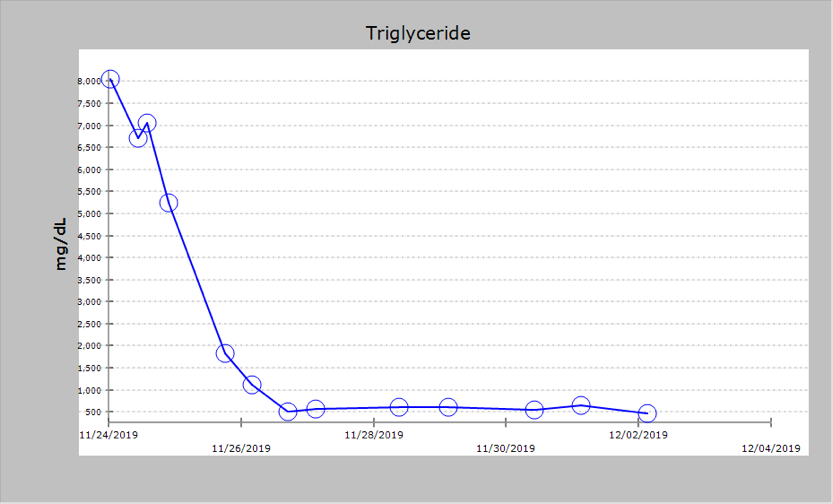